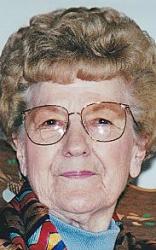 Dorothy was born on Dec. 24, 1924, to George and Sadie (Hall) Smith in Lamar, Nebraska. She joined older sisters, Lillian and Virginia. The three girls formed a loving sisterhood which flourished throughout their lives.
The Smith family lived on a farm and Dorothy joined her sisters in walking to elementary school near their home. During her high school years, Dorothy attended school in Curtis. She graduated from the Curtis School of Technical Agriculture.
Following her graduation, Dorothy taught school for several years in the Lamar and Imperial area rural schools. During the WWII years, Dorothy lived in California. Shortly after returning to the Imperial area, Dorothy began working at the Farmer’s and Merchant’s Bank in Imperial and served on the Board of Directors. She enjoyed her years at the bank very much, caring about her customer’s needs, their families and building friendships which lasted her lifetime.
Dorothy and Paul Weiss were married in Imperial in 1953. They enjoyed an active lifestyle which included golf, fishing, boating and travel in their RV camper. Their activities and travel always included friends and family.
They were passionate about their community of Imperial. Dorothy was active in the Lutheran Church, the Hospital Board, the Chase County Fair Board and the Community Center. Being able to get out and about in the community, being among her friends, community activities and farming progress was always important to Dorothy.
Dorothy spent many happy times with her nieces and nephews taking them golfing, fishing and to the county fair.
She is fondly remembered by her many friends as well as the following family members: sister, Virginia Stevens; nieces and nephews, Georgia Stevens, Jim (Linda) Stevens, Kevin Kuhlman, Karen (Pat) Yost, Paul (Lorna) Kunneman and Peggy (Lee) Norman and many great-nieces and nephews.
She was preceded in death by husband, Paul Weiss, and sister Lillian Kulhman.
Dorothy passed away on July 15, 2020, in Englewood, Colorado. She was 95 years of age.
Funeral Services were held Wednesday afternoon, July 22, 2020 2 P.M. at the Zion Lutheran Church in Imperial with Pastor David Kahle officiating. Interment will follow at Mount Hope Cemetery, Imperial.
Memorials may be made to the Zion Lutheran Church of Imperial and Chase County Community Hospital.
Online condolences may be left at liewerfuneralhome. com.
Liewer Funeral Home entrusted with arrangements.