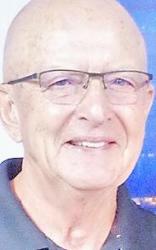 Dennis Joe Holmes was born on July 19, 1949 in Burwell, Nebraska to Robert Maurice Holmes and Phyllis Lenore (Hennings) Holmes. Dennis was the oldest of seven children.
Dennis graduated from high school at Sargent with the class of 1967 and graduated with a business degree from Kearney State College in Kearney.
Dennis’ first marriage was to Dianne Gumb in 1972. To that union were born two children: Jarrod James Holmes, who died as an infant, and David Jason Holmes.
Dennis married Deena Lynice Brandt in 1982. They were happily married for 36 years. They lived in Sargent, Kearney and later full time in their motorhome.
Dennis worked at the coop in Sargent and was in management at the coops in Burwell and Lexington. He later managed the NAPA store in Sargent.  He and Deena later owned and operated a Miracle Ear Franchise in the State of Nebraska with offices in Kearney, Hastings, Grand Island, North Platte and Lincoln for over 25 years. They also operated hearing aid offices in Omaha and Council Bluffs, Iowa for a few years.
Dennis and Deena retired in 2007 from their Miracle Ear business and started traveling and living in a motorcoach shortly after that. They traveled across the United States and Canada.  They wintered in Arizona, California, Texas and Florida.  They had many years to collect and enjoy friends and memories. Dennis was part of dancing groups, Pickleball groups and one of his favorites, The Breakfast Boys at the Riverbend MotorCoach resort in LaBelle, Florida.
Dennis passed away on Jan. 14, 2019 in Omaha from complications of cancer treatment. He was 69 years of age.
Dennis was preceded in death by his parents Robert and Phyllis Holmes; his first son Jarrod; his brothers Ron Holmes and Don Holmes; and his father-in-law Gilbert Brandt.
Dennis is survived by his wife Deena Holmes, now living in Imperial; son David Holmes and grandson Preston of Brookfield, Missouri, both of whom he treasured; sister Gloria (George) Louch of Mitchell; brothers Gale (Hank) of Aurora, Colorado, Robert Holmes of Norton, Kansas, Bill (Brenda) Holmes of Norton, Kansas; sisters-in-law  Patty Holmes of Valparaiso, Indiana, Barbara (Steve) Stanek of Burwell; mother-in-law Pauline Brandt of Imperial; brother-in-law Troy (Judy) Brandt of Imperial; aunt Edith Dilsaver of Wichita, Kansas; uncle Claire (Joyce) Holmes of Hershey; also his nieces, nephews and cousins and many other extended family members whom he loved so much.
No formal services are planned. Dennis had made his wishes in writing years ago to donate his body to the Anatomical Board at the University of Nebraska Medical Center (https://www.unmc.edu/genetics/about/deeded-body.html). No memorial has been established.