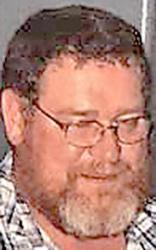 Charles Allen Oldaker, 51, of Grant, Nebraska entered his heavenly home on Saturday, Aug. 11, 2018.
Allen was born July 23, 1967, in Chadron to Charles and Letha (Bell) Oldaker.
At the age of three, he welcomed his sister Tammy into his world. He began his school years in Harrison, and finished them in Imperial.
Allen was a truck driver for most of his working life. In 1996, Allen was stricken with Antiphospholipid Syndrome, which caused many health problems over the next 22 years.
Allen loved the great outdoors, many days were spent hunting and fishing, or just driving the countryside.
On Dec. 13, 2015, Allen was baptized by Rev. Nora Mendyk, whom he adored and became a member of the Grant Methodist Church.
Allen was preceded in death by both sets of grandparents, Perry and Lola Bell, and Gayle and Anna Oldaker; numerous aunts and uncles.
Survivors include his parents, Charles and Letha Oldaker of Madrid; sister, Tammy (Brian) Helser; nephew, Trace Helser, all of Champion; daughter, Sara Oldaker of Geneva; and numerous relatives and friends.
A private family inurnment will take place at a later date in Harrison.
A memorial has been established in his memory. Condolences can be shared at bullock longfuneralhome.com.
Bullock-Long Funeral Home of Grant is assisting the Oldaker family.