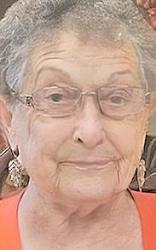 Carol Jean (Mick) Quinn, 83, of Oxford, Nebraska passed away on Monday, Dec. 31, 2018, at CHI- Health Good Samaritan in Kearney, surrounded by family.
She was born July 16, 1935 at the Chase County Hospital in Imperial, the eldest of two children born to Harold Eugene and Phillis G. (VanDyke) Mick.
She received her primary education at Enders Public School in Enders and then attended Chase County High School in Imperial, graduating with the class of 1954.
Carol had one sister, Sherrill Ann Mick, who was born on March 10, 1938, with whom she was very close. The girls spent a lot of time at their grandparents Pearl and Faye Browning’s farm west of Enders and in Stratton at Grandma and Grandpa VanDykes’.
As a child she also enjoyed camping at Enders Lake, vacationing in the Colorado Rocky Mountains, riding in the semi with her father and playing softball with friends. At a young age, Carol developed her faith through attending Sunday school and church.
In high school, she was a member of the Chase County Drill Team and enjoyed going to baseball, football and basketball games (basketball being her favorite). She also enjoyed going to movies, roller skating and cruising around with her girlfriends.
Upon graduation, she started working at Enders Café, where she met the love of her life, Willard “Duane” Quinn. They were united in marriage on Feb. 6, 1955 in Enders at the Church of the Brethren. The family made their home in Oxford, where she worked at the local Dairy Queen.
On Aug. 12, 1956, the first of their five children was born, James Eugene Quinn. Shortly after, Robert Duane Quinn was born on Aug. 17, 1957. Carol was a stay at home mom, nurturing her boys, sewing and cooking. On Dec. 19, 1959, their third son was born, Michael Joe Quinn. Next came their only daughter, Janis Renee “Sis” Quinn, born on Feb. 20, 1961. On Dec. 6, 1968, Patrick J. “P.J.” Quinn was born and their family was complete.
She remained a stay at home mother, opening her home to other’s children and babysitting. As Carol’s children grew older, she went to work outside of the home as a Custodial Specialist at the local Post Office. She was employed there from 1978 until 2011. Carol treasured this job, as it kept her connected with “all the people” in Oxford.
As a family, Carol, Duane and their children enjoyed flying kites, picnicking, fishing and boating at the Harlan County Lake, many adventures at the Republican River, stock car races in Nebraska and Kansas, softball, football and basketball games and lots of time visiting relatives and friends. One of her greatest passions was cooking and baking for family and friends. Fried chicken and potato salad were her favorites to prepare for others to enjoy.
Carol was also known for having a green thumb. She enjoyed gardening, planting flowers, nurturing her house plants and collecting dolls, spoons and roosters. She was known to have a “shoe fetish;” on every shopping trip, buying at least one pair of shoes to accentuate her youthful sense of style.
Carol had a knack for removing stubborn stains; her children, grandchildren and great-grandchildren turned to her for any and all of her home remedies and comforting advice. Her children, grandchildren and great-grandchildren were her greatest treasures in life. Carol was very passionate about others, sending cards, letters, words of encouragement, news and updates. Her acts of love and kindness truly resonated with others.
Carol was active in her community. She belonged to a few women’s groups, served on various boards and was very active with the First Baptist Church. Her strong faith always allowed her to prevail through the ups and downs of life.
She was preceded in death by her parents; her husband W. D. Quinn; sister Sherrill Ann; brother-in-law Mick Quinn; and her grandparents.
She leaves to mourn her passing four sons: Jim (Laurie) Quinn, Bob (Ricky) Quinn, Mike (Dawn) Quinn, all of Oxford and P.J. (Lesha) Quinn of Mead; daughter Sis Quinn Best of Oxford; 16 grandchildren: Tiffany (Bob), Caleb (Joy), Cyrus and special friend Gabby, Randi Jo, Morgan (Jessica), Macenzie (Donny), Cody (Ann), Paige and special friend Colton, Jolene (Steve), Megan (Brett), Dakota, Chance, Brody, Alex, Josh and Emily; 23 great-grandchildren: Emma, Easton, Riley, Daecie, Maddox, Hadley, Decker, Jackson, Bailey, Ruby, Bregan, Braxton, Brecklyn, Zalie, Cooper, Ashtin, Lauren, Kendall, Piper, Blakelee, Simon, Rhett and Drake; brother-in-law Jerry (Kay) Quinn of Oxford; sister-in-law Lana (Lyle) Minner of Topeka, Kansas; son-in-law Rob Best of Oxford; and a host of nieces, nephews, other relatives and friends.
Visitation was held on Sunday, Jan. 6, 2019 from 2 to 5 p.m. at the First Baptist Church in Oxford with the family greeting from 2 to 3:30 p.m.
Funeral services for Carol Jean (Mick) Quinn were held on Monday, Jan. 7, 2019 at 11 a.m. at the First Baptist Church in Oxford, with Pastor Brian Jenkins officiating. Interment followed services at the Oxford Cemetery.
A memorial has been established in Carol’s honor, and kindly suggested to the Mead Raider’s Basketball Fund or the First Baptist Church Decorating Fund.
Expressions of caring and kindness can be sent to the family at www.nelsonbauerfh.com.
The Mitchell-Nelson-Bauer Funeral Home in Oxford is in charge of the arrangements.