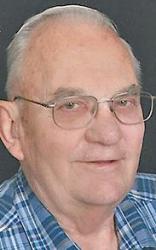 Ansel Aaron Hill was born about 6 miles west of Imperial on Sept. 10, 1941 to Moses and Georgia Hill. When Ansel was 4 years old, his family moved to Imperial. He attended Imperial Grade School and graduated from Chase County High School in 1959.
He married Joyce E. Browning 54 years ago on Aug. 6, 1963. To this union, 2 sons were born: Brian and Dirk.
Ansel worked at the Imperial Bakery (which is where he received his inspiration for his famous nut rolls) and the Star Theater while he was in school. After he graduated, he worked for Sweeney Furniture store before a long career at Jack and Jill grocery store.
In March of 1966, Ansel was drafted into the US Army. He spent one year in Vietnam with the 595th Engineers as an equipment operator. He operated a large grader and built roads, runways and helipads.
When he returned home from the Army, he went back to work at Jack and Jill, and in 1979 he became a part owner. In 2002, Ansel and family purchased the rest of the business, at which time the name of the store changed to Hill’s Family Foods. Ansel worked beside his wife for nearly forty years. He was a very respected businessman and always treated everyone with the utmost respect. He valued family, friends, employees, and customers alike.
Ansel spent 19 years with the Imperial Volunteer Fire Department and attained the rank of Chief.  He was a member of the Lions club, Eagles Club and Chamber of Commerce. He was a past President of the Chamber of Commerce and the Lions Club. He was a member of the United Methodist Church in Imperial for over 50 years.
Ansel and Joyce enjoyed many trips together while traveling with other grocery store owners to places like Hawaii and the Bahamas. They traveled to Branson, Missouri together and always wished they could go back. He also enjoyed traveling to Missouri for reunions with his Army buddies.
Whether it was fishing or hunting with Brian; golfing or a game of cribbage or three with Dirk, Ansel loved to spend as much time with them as he could. He was a great supporter of whatever his boys’ interests were. He always took time off from work to attend his kids and grandkids sporting events and activities. He loved to spend time with his grandkids, especially sitting and reading to them. He had a great knack for baking and cooking that he inherited from his mother, Georgia. He also enjoyed gardening, woodworking, playing cards with neighbors and following the Huskers.
Ansel was an early riser and would meet his close friends for coffee in the morning to start the day off.
Ansel was a very humble man that listened more than he spoke.
He had a special ‘ol’ buddy’ in Rob Browning who was always there for him in the good times and the hard times.
Ansel passed away on Tuesday. June 12, 2018 at the Imperial Manor. He was 76 years of age.
He was preceded in death by his parents Moses and Georgia Hill; mother and father-in-law Ralph and Dollie Browning; brothers-in-law Mack Hazen and Robert Hohl; and sister-in-law Sandra Browning.
Ansel leaves behind his wife Joyce; two children Brian (Shyann) of Denver, Colorado and Dirk (Rhonda) of Imperial; Grandchildren Tony, Seimone, Shane, Chad and Brooke; Carissa, Jaiden, Lily, and Marina; great-grandchildren; and sisters Ruth Hohl of Wauneta and Eula Dart of Papillion; Sisters-in-law Janet Hazen, Connie (Ron) Dart, Linda (Jim) Davis, Jeanne (Leon) Sievers; and brother-in-law Larry Browning; numerous nieces and nephews and friends.
Ansel’s legacy will continue on in all those that he significantly impacted directly and indirectly.
Funeral services were held Saturday, June 16, at 10:30 a.m. at the United Methodist Church in Imperial with Dr. Daniel Marshall officiating. Interment followed services at Mount Hope Cemetery in Imperial.
A memorial has been established in Ansel’s memory. Online condolences may be left at liewerfuneralhome.com.
Liewer Funeral Home is entrusted with arrangements.