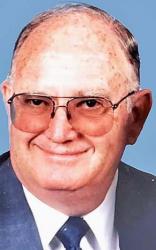 Alfred Eugine Hillberry passed away at this home in Santa Maria, California March 2, 2020.
Alfred was born March 6, 1926 in Worland, Wyoming to George W. Hillberry Jr and Leora Hillberry. He grew up on the family ranch on Gooseberry Creek.
He attended Worland Schools graduating from Washakie County High School with the class of 1944. Following graduation, he enrolled in the U.S. Navy and served two years.
He graduated from the University of Colorado with a degree in physical education and taught school and coached in Gering, Nebraska and Rifle, Colorado. Al met the love of his life in Rifle, Mary Isabel Hoffmeister, and they were married in 1952. His basketball teams did very well, and he taught all levels of high school math. He later returned to the University of Colorado and received a Master’s Degree in business administration.
After graduation, he worked as a bookkeeper while living in Thornton, Colorado. The family then moved to Santa Maria, California and he went to work for the Martin-Marietta Company at Vandenberg Air Force base. He taught himself to program computers at the dawn of the computer age, and combined with his accounting and business background, was a very valuable asset to any division he worked in.
He was transferred to Minneapolis, Minnesota for 5 years to help set up some computer systems, after which he returned to Santa Maria to finish his career.
He married Mary Hoffmeister of Imperial on Nov. 23, 1952. They were very proud of their two children, Steven Max, and David Lynn. Steven became a dentist in Montana, and David a civil engineer in California. Al really enjoyed golfing, playing bridge, and spending time with his family, especially his grandchildren. He loved to read to them, and also enjoyed teaching them math and math puzzles.
He is survived by his sons David of Santa Maria, California and Steven Max (Marie) of Lolo, Montana; grandchildren (Steven’s children) Dylan Hillberry, of Bozeman Montana, and Hannah Hillberry, of Kalispell, Montana; brother Dwaine Hillberry of Craig Colorado; sister-in-law Vicki Hillberry of Powell, Wyoming; and sister Norma Jacobs of Holbrook, Arizona.
He was preceded in death by his wife Mary; brother Jim Edgar Hillberry; and parents George and Leora Hillberry.
Graveside inurnment services will be held Saturday, Sept. 12, 2020, 11 a.m. at Mount Hope Cemetery, Imperial, with Pastor Debra Copple and Rev. Melody Newman officiating.
Memorials may be made in Alfred’s name to the First United Methodist Church, 311 S. Broadway, Santa Maria, CA 93454
Online condolences may be left at liewerfuneralhome.com.