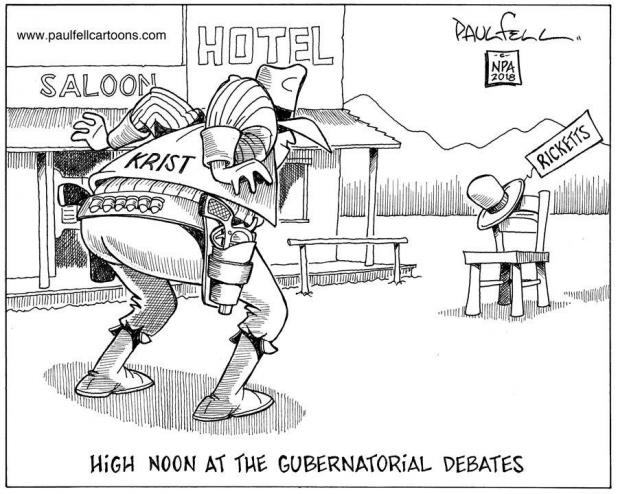 As surely as there will be a Nebraska State Fair, there will be debates between incumbent Republican Governor Pete Ricketts and his challenger, Democrat Bob Krist. There will NOT be enough debates.
Traditionally the first debate has been on Labor Day, marking the official start of the full-on campaign. This debate is a few days early (Aug. 30) and one has to question what kind of crowd you’ll draw on a Thursday afternoon at 3 pm at the State Fair in Grand Island. But, maybe that was intentional.
Two more debates are scheduled for Wayne and Omaha. None are scheduled in western Nebraska, so it’s apparent that all you folks out there have already made up your mind.
But, then again, both candidates are from Omaha. The biggest newspapers and the most saturating electronic media outlets are all in the eastern end of the state.
Governor Ricketts’ campaign Director of Communications Matthew Trail said, “With an opponent who has desperately resorted to misleading attacks and outright lies, this is an opportunity to set the record straight.”
Krist campaign Communications Director Dan Parsons said the Wayne and Omaha events were chosen instead of a televised debate sponsored by KETV in Omaha -- that Krist already has agreed to -- and a proposed debate that would be aired by KOLN Channel 10/11 in Lincoln and carried statewide over its Gray Television affiliates in Omaha, Hastings, North Platte and Scottsbluff.
“While we both agreed to participate in the State Fair debate, there have been no discussions regarding future debates, rules, locations or format,” Parsons said. “Instead, Governor Ricketts has taken a ‘my way or the highway approach,’ which is an attitude reflected throughout his administration.”
“This is how an out-of-touch and arrogant candidate acts, not the governor of a great state,” Parsons said.
As the underdog, Krist would obviously benefit from the statewide exposure. I think it would also give Ricketts an opportunity to show his softer side—I think he has one—and make him seem less like the agenda-driven, condescending persona into which he has evolved in four years. There’s that ‘my way or highway’ attitude.
The Wayne economic development debate (Sept. 21 at Wayne State College) was “created at the request of the Nebraska Republican executive director,” Parsons said. Trail said the governor “looks forward to detailing Nebraska’s growth and progress over the last four years and its bright future ahead.”
An Oct. 7 joint appearance at the Nebraska Jewish Political Forum in Omaha is not even a debate, Parsons said. So, why do it?
Sure, both candidates are from Omaha. But hey, I’m old enough to remember when two candidates for U.S. Senate—both also from Omaha and seeking the Republican nomination to replace Omaha Democrat Ed Zorinsky—actually held a debate at Scottsbluff High School.
Responding to the criticism, Trail said: “These invitations, which were extended to both campaigns, were accepted to debates that are open to voters based on Governor Ricketts’ schedule.” Read that: The Republican governor of a Republican state is in the driver’s seat and is darn well going to call the shots. There’s that arrogance.
So, what’s the lesson for folks in Greater Nebraska? Is it a matter of demographics, geography, fundraising or publicity? Does somebody not want to discuss your property taxes? Is there something else out there that demands an answer? There’s that out-of-touch.
Nebraska voters deserve statewide debates. Live and in-person debates so people can draw their own conclusions before they vote. Think about one in the Panhandle, one in the Sandhills, one in southwest Nebraska, one in southeast Nebraska and the State Fair. Let the one in Wayne be a northeast Nebraska event.
Yes, that’s six and it might really stretch the governor’s busy schedule to make it all work. But darn it, we’ve had four years of the guy and we deserve a chance to look at some options. Don’t you think?