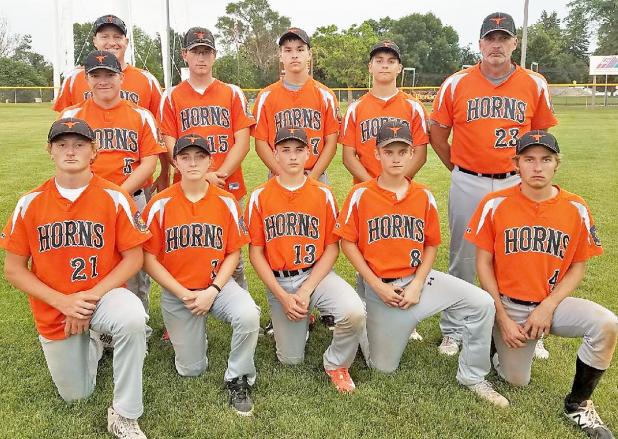 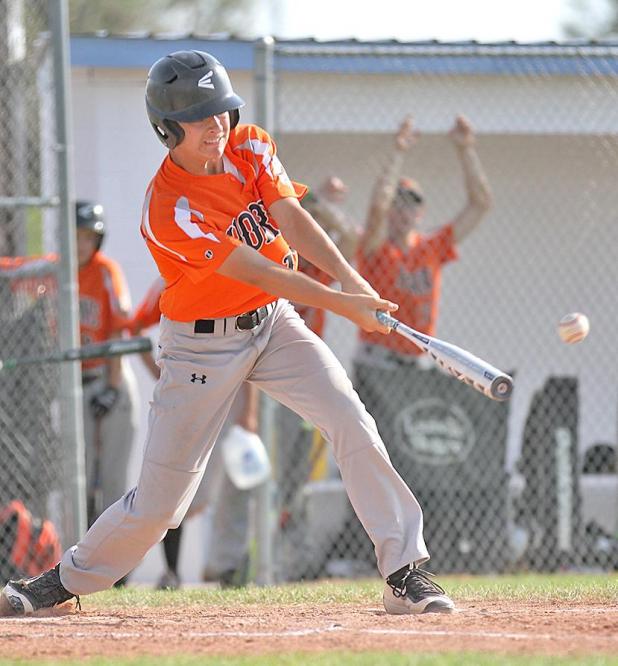 Bennett Bauerle connects for one of his two doubles late in the game against Bridgeport in Saturday’s area tournament. (Photo courtesy of Scottsbluff Star Herald) 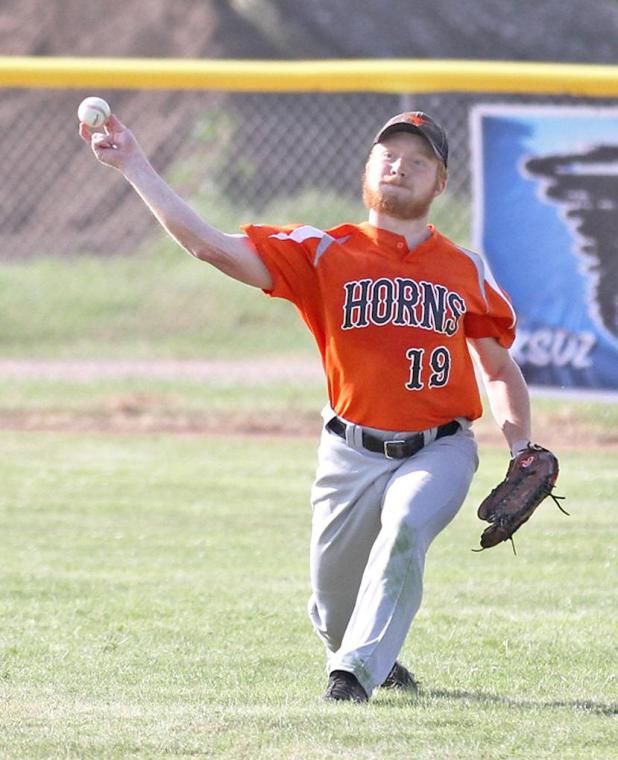 Right fielder Noah Griffin gets the ball back to the infield in the fifth inning against Bridgeport. (Photo courtesy of Scottsbluff Star Herald)

While Imperial’s senior Legion team went 0-2 in the area tournament last week, their coach made sure they knew how important the six “true” senior players contributed.
Coach Bruce Peterson directly related the seniors’ contributions as key in the success they saw this summer with Imperial’s Legion baseball program, which included a state berth by the juniors.
Having the seniors to practice with in game preparation was a big factor for the juniors, he noted.
“Having 18 at practice, that helped,” Peterson said.
With just six senior-age players on Imperial’s team this season, they were on the younger side in the C7 area senior Legion tournament last week in Gordon, Peterson said. Several junior players filled in the gaps on the senior roster in the tourney as they have all season.
The other four area C7 teams fielded players 17 to 19 years old. That makes a big difference, he said.
The four other area teams also had just a senior team this season, so didn’t have the long break Imperial did as their juniors competed at area and state tournaments.
The six-team tournament bracket also favored No. 5 seed Ainsworth, who received a second round bye after Morrill didn’t compete, while No. 4 seed Imperial had to play top-seeded Bridgeport in its loser’s bracket game.
Overall, Imperial’s seniors finished with a 2-12 season record. Here’s a recap of their two tournament games against Valentine and Bridgeport.
Valentine game
The nearly three-week break between games really showed in Imperial’s first tournament contest Friday, Peterson said.
“Our lay-off really showed against Valentine,” he said.
It ended up being a game that “kinda got us back into it,” however, he said.
It didn’t help that his team committed several errors. They were also out hit nine to five.
Valentine opened with a run in the first, then plated three more in the second, taking an early 4-0 lead.
On a Will Kuenne base hit and Valentine error, Imperial put a run across in each of the third and fourth, but that would be the end of their scoring in the opener.
Valentine scored another four runs late in the game to take the 8-2 win.
Duncan Rector was on the hill for Imperial, surrendering seven runs on eight hits over five innings. He tallied four strikeouts and no walks.
Dominic Sis finished the game, pitching an inning.
Kuenne led Imperial’s hitters, finishing 2-4 at the plate with two singles.
Also singling were Bryce Zuege, Sis and Josie Peterson.
Bridgeport game

To read more on senior Legion baseball and other stories, please log in or subscribe to the digital edition. https://etypeservices.com/Imperial%20RepublicanID359/