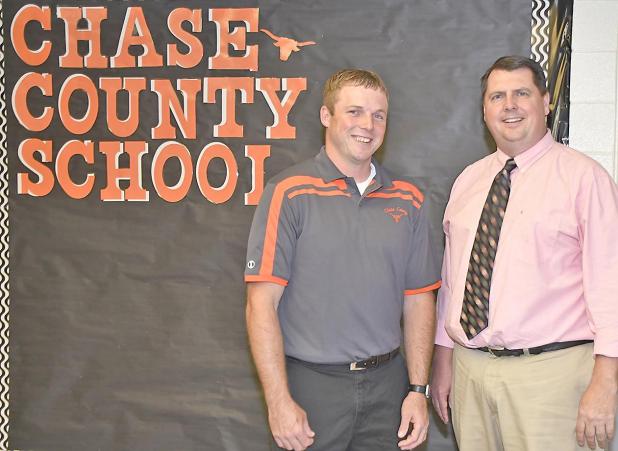 Even though two new Chase County Schools administrators attended their first board meeting last week, it lasted only about an hour.
School Supt. Randy Klooz and 7-12 Principal Jon Lechtenberg, both hired the past several months, spoke briefly with the board at the July 10 meeting, as board members breezed through a number of agenda items.
Both Klooz and Lechtenberg began duties with CCS this month. They replace Supt. Joey Lefdal and 7-12 Principal Chad Scheel.
Klooz moved here from Laurel, where he was PK-12 superintendent at Laurel-Concord-Coleridge School the past six years.
Klooz has also worked in southwest Nebraska in the past as a sixth grade teacher in Culbertson (1997-99) and 7-12 Principal/AD at Hayes Center Public Schools (2001-03).
Lechtenberg is taking on his first school administrative job, after the last 10 years at Southern Valley Schools, where he taught ag education and was FFA advisor. Until 2014, he also did some junior high coaching.
Klooz told board members he’s excited about being at CCS.
“The staff has been great to work with,” as well as the community, he said.
As of last week’s meeting, Lechtenberg was not yet officially on duty, but said he’s met with some staff already, and was getting settled after the family moved to Imperial from Oxford the end of June.
Student chromebooks
CCS students in grades 9-11 will be getting new Acer chromebooks for the upcoming school year.
Board members approved the purchase of 160 chromebooks for $66,918.80, amounting to $418.23 per computer which includes warranty,  extended service agreement and license on each.
Shane Gerhartz, the school’s technology director, said the computers previously used by 9-11 students will be moved to the elementary and middle school grades.
The 2018-19 seniors represent the final CCS class using Macs in the school’s one-to-one laptop program, Gerhartz noted, and will finish out next year with them.
There are also plans to replace 33 computers for middle and high school staff, Gerhartz said. He is still meeting with staff to determine who wants laptops and who prefers PCs. Some computers now used by staff are six years old, he noted.
Like those for the students, he said the goal is to have the teachers’ computers here by the start of school.
Cement work

To read more on the school board meeting and other stories, please log in or subscribe to the digital edition. https://etypeservices.com/Imperial%20RepublicanID359/