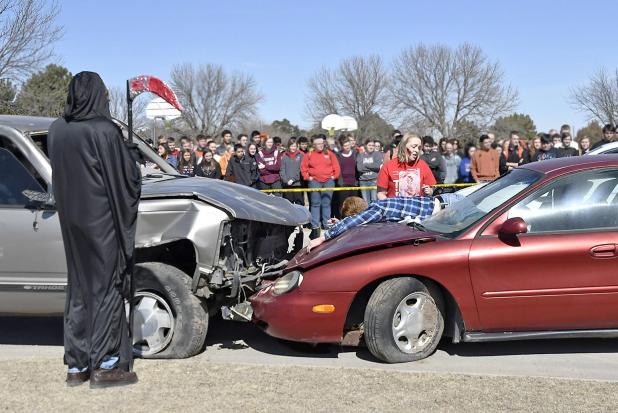 With the Grim Reaper standing near, CCS senior Hayley Vitosh, who was driving drunk in the two-vehicle simulated accident last week, laments over her injured fellow students, two of whom did not survive the accident. (Johnson Publications photo)

One sophomore at Chase County Schools said she was struck by how much alcohol can influence driving.
Another said she was impacted by the serious injuries.
A third student commented, “It was mind-blowing,” saying she never thought she would ever see anything like that.
They all were referring to a crash simulation last Thursday in front of CCS, as they witnessed the aftermath when eight of their fellow classmates were hurt and injured in a two-vehicle accident in which drunk driving was involved.
One student in the vehicle was pronounced dead on the scene after his body was thrown through the front windshield in plain view of the student body gathered along the edge of the street.
The “Shattered Dreams” program was organized and put together by the safety committee at Chase County Community Hospital, with support from the school and a number of local first responders.
Shannon Kuhlmann, R.N., a member of the hospital’s safety and emergency preparedness committees and one of the main drill coordinators, felt it was an effective event.
“We’ve had a lot of good feedback from students, parents and teachers,” she said.
“They felt it was very effective and its message was vividly brought to the students. They learned from it,” she said.
Kuhlmann said the “Shattered Dreams” program offers “real life” experiences without the “real life” risks.
She said it also highlighted how emergency responders work together in a situation like this.
“Even though it was a simulation, they (responders) did what they do every day. They were very effective in bringing that message to the students,” Kuhlmann said.
The program is designed to challenge students to think about drinking and driving, riding with someone who has been drinking, or texting and driving.
A view of the students along the street, kept away from the accident scene with yellow caution tape, showed many with solemn faces.
They watched as senior classmate Hayley Vitosh, the drunk driver, paced between the two crashed cars as fellow students inside the vehicles cried out in pain.
Fellow senior Noah Griffin, who went through the windshield in the accident, was not moving.
A lone beer can rolled around next to the cars.
The accident call went out  at 10:45 a.m. and it wasn’t long before the Imperial Police Department, Imperial EMS and Imperial Volunteer Fire Department were on scene. Emergency Manager Duane Dreiling was also on hand to assist.
Before long, the Great Plains LifeNet helicopter landed across the street on the fairgrounds to transfer a badly-injured Halle Fiedler to the Chase County Community Hospital. She did not survive.
Griffin was pronounced dead at the scene—his body covered with a tarp until Liewer Funeral Home came to transport his body.