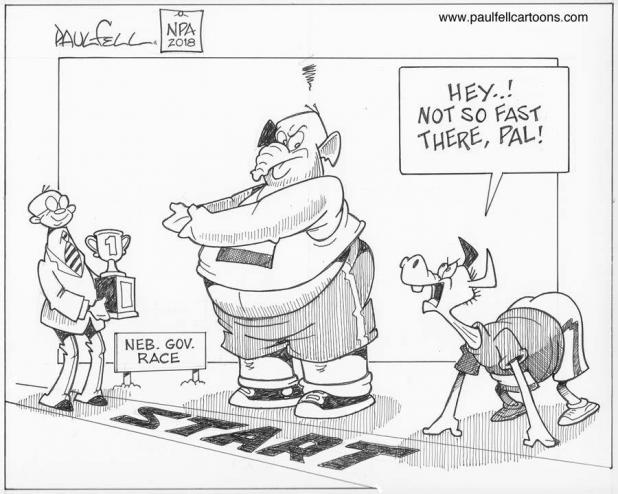 Now we have a gubernatorial race

With the exception of one-term Governors Kay Orr and Norbert Tiemann in recent years, the power of incumbency has been very strong in the quest to be Nebraska’s chief executive.
Governor Pete Ricketts and his Republican supporters are banking on that this year. But, assuming that recently announced Democratic candidate Bob Krist of Omaha defeats a couple challengers in the May primary, there could be an interesting race for governor.
Not that the Democrats haven’t had good candidates in the past, they have lacked the ability to cross party lines like Ben Nelson did when he defeated Orr.
In case you have forgotten, Nebraska is a primarily Republican state. Even the supposedly nonpartisan Unicameral has a balance of 31 Republicans to 16 Democrats, one Independent and one Libertarian. Political analysts have long agreed that Nelson, a centrist Democrat, was the beneficiary of support by a large bloc of Republican voters in Douglas County.
Krist, one of six state senators who is being term-limited out at the end of this legislative session, announced last year that he was going to run as a member of a third party. Then he decided he would be an independent and just recently decided to run as a Democrat. As a moderate Republican who was often at odds with the heavy hand Ricketts wielded with colleagues, it’s not surprising that he changed affiliation.
The third party attempt was altered by a law passed last year that increased the number of signatures needed to create a party by about 20 times the original number (from about 5,000 to more than 100,00). The independent bid would have set up a three-way race. We saw how that worked out in recent national elections.
As predicted, the Republicans have criticized Krist.
Republican National Committee member and former state party chairman J.L. Spray of Lincoln called it “more flopping around than a catfish on a sandbar.”
Ricketts’ campaign communications director Matthew Trail said the campaign has remained focused on sharing the governor’s vision “throughout the odyssey of Senator Krist’s candidacy.”
It didn’t take Krist long to define the differences between he and Ricketts, chief among them is the incumbent’s repeated calls for the University of Nebraska to make more than $34 million in cuts over two years to help balance the state budget. Krist said finding new revenue is a better solution than “trying to cut our way out of this.” Cutting, he said, has consequences.
Krist calls himself a common sense moderate and said he wants to bring all parties to the table to discuss issues important to all Nebraskans. He is one of a handful of moderates, the others of whom have been targeted for defeat by Ricketts’ contributions to opponents.
In some cases, Ricketts even found the people to run against the senators who didn’t vote with him or voted to override vetoes. Krist said voters have grown weary of the partisan politics that divide us and has, in some instances, hamstrung legislative action.
He has been in the Legislature for 10 years, making him the second senior member to the venerable Independent Ernie Chambers. Krist was appointed to replace Omaha Senator Mike Friend by then-Governor Dave Heineman and twice re-elected. His candidacy was welcomed by Democratic stalwarts and a number of Republicans with whom he has served in the nonpartisan Legislature. He reiterated that Nebraskans want a reprieve from partisan governance.
Ricketts said he would continue to make lowering property taxes a top priority during his second term. He also wants to continue his on-going plans of making government customer-oriented, efficient and effective.
The stage has been set for an interesting contest. Let’s hope that Nebraskans are the big winner in this one.