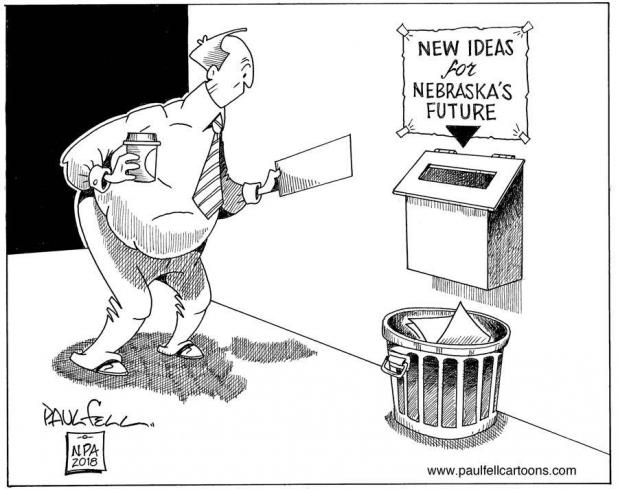 Senator dreams of future city; good for him, but good for us?

With apologies to the other 48, I think Senator Paul Schumacher of Columbus might just be the brightest bulb in the Unicameral lamp.
The Columbus attorney, who will be term-limited after this session, is often called “The Professor” by colleagues and observers of the legislature. He’s a forward-thinking risk-taker, willing to float ideas that others have either not thought of or been afraid to mention.
It appears he may have saved his best for last with his proposal (LR 269CA) to let voters decide if the state should create what he calls a New City, a sovereign 36-square-mile area with at least 10 people per square mile that would be granted complete or partial sovereignty for up to 99 years.
Sovereignty? A self-governing state, or colony, or city. Think autonomy, independence, self-government, freedom. That’s avant-garde, but Schumacher said he’s been daydreaming about the approach to the new global economy for years.
While the idea of no city or state taxes and no local or state regulations probably makes the average partisan politician very nervous, Schumacher thinks it would provide the kind of spark that ignites the minds of young people who can make it work.
He believes Nebraska is “going nowhere fast.” He wants to examine “the real situation that our state is in.”
He said the state is currently: uninspiring; sparsely populated; culturally restricted; an inland state largely dependent on a very rudimentary economy. He wants to provide a mechanism for Nebraskans to leverage nothingness and emerge as a modern economic center over the course of a century.
I agree that the Legislature needs to have the discussion in a very public way, perhaps through a statewide interim study with numerous local meetings. A task force could compile results to be discussed by the Legislature.
But, none of this is going to happen in a short session when lawmakers have a mess on their hands with challenges to education funding, property taxes and corrections reform.
Not to mention that it’s an election year. The measure stands a snowball’s chance right now.
Schumacher’s daydream would create a city to attract industry and people by offering: a gigawatt of electric power generation and transmission facilities; Tier 1 fiber-optic communication; doorstep access to locally produced organic grains and meats and unlimited potable water; bullet trains to a major international airport and the Rocky Mountains; railroad rights of way and a “triangle of economic power bordered by Interstates 25, 76 and 80.”
He said this would allow Nebraska “to ride the wave, rather than try to stand in the way of the wave.” This could happen with a huge investment from a multinational corporation attracted by self-government, self-taxation and self-regulation.
Hey, if you’re going to dream, dream big. Granted, the proposal doesn’t answer the journalistic four w’s and h—who, what, when, where and how—but the senator said that’s the requirement to stick to a single subject, granting sovereignty, on amendments to the Nebraska Constitution. If the idea were approved by voters, the Legislature would have to work out the details.
The public hearing for the proposal drew no proponents and opposition from the folks who don’t want to see expanded gambling and a woman who said lawmakers should beware of simple solutions to complex problems.
I am troubled by the “triangle of economic power” which Schumacher touts in the bill’s committee statement as “amplifying the dynamics of Denver and the front range, a bullet train less than an hour away from a major international airport and from the majesty of the Rocky Mountains.”
In Nebraska, that’s a pretty narrow range of options, basically portions of Kimball, Cheyenne and Deuel Counties. I wonder how folks in the other 90 counties are going to take that?
Schumacher admits the proposal is insane.
“So were the pyramids, circumnavigation of the globe, the transcontinental railroad, heavier than air flight, the moon in a decade and the inexplicable compulsion to be Great Again,” his statement to the committee said, “Imagination has great value!”
He said he wants Nebraskans to define a future and, should they decline to do so, to inspire bolder spirits elsewhere.
I like bold, but let’s think this through.