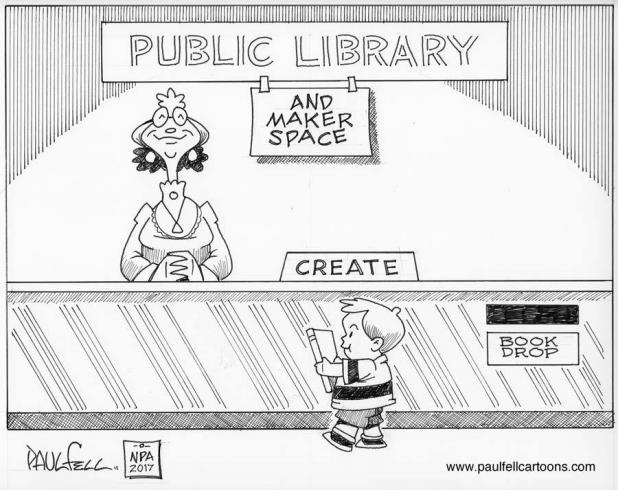 Makerspaces are the new buzz among the young and hip tech-savvy 20-somethings. But they’re not something that you’ll just find in Lincoln or Omaha.
They’ll be coming soon to a library near you, specifically 18 libraries from Nebraska City to Scottsbluff, Wayne to Sidney and a number of places in-between.
Thanks to a recently announced initiative by Governor Ricketts, these spaces—where creative people can meet, design and turn ideas into things—will be available on a rotating basis with four “labs” that will offer resources such as: computers; 3-D printers; audio-visual equipment and editing tools; and traditional arts and crafts supplies.
Ricketts said the 18 libraries will be the initial local participants in “Nebraska’s Library Innovation Studios: Transforming Rural Communities” project to create library makerspaces.
The state Library Commission was recently awarded a National Leadership Grant of $530,732 by the Institute of Museum and Library Services for this partnership project with the University of Nebraska Lincoln Innovation Studio, Nebraska Extension, Regional Library Systems and local libraries.
The partnership demonstrates how Nebraska communities can use technology and education to empower community residents to create, learn and invent, he said. The benefits of the project are three-fold: expanding the skills of the workforce, supporting entrepreneurs and encouraging lifelong learning.
Communities are strengthened by involvement in and support of expanded learning through technology and innovative learning tools not readily accessible locally. Stimulated creativity, innovation and the exchange of ideas will foster entrepreneurship, skills development and local economic development.
The Nebraska Innovation Studio—the UNL makerspace—is the creative and collaborative hub of UNL’s Nebraska Innovation Campus, that mix of old and new spaces developed on the former site of the State Fair in Lincoln. The primary focus of the space, which is several years old, is on creativity, interdisciplinary collaboration, entrepreneurship and education.
Nebraska Extension is one of three components of UNL’s land-grant mission. Extension educators and specialists put research to work in local communities, businesses and individuals’ lives. Extension personnel live and work in Nebraska communities across the state and engage citizens in recognizing and solving problems.
Ricketts said 12 additional libraries will be selected in 2018 to host makerspaces in 2019/20. The project concludes June 30, 2020.
Library Commission Director Rod Wagner said public libraries are the natural gathering points for people to come together to share materials, knowledge and experiences. He said libraries have always been dedicated to community partnership, collaboration and the free exchange of ideas.
Makerspaces are the next step in that progression. Nebraska Innovation Studio founder Shane Farritor said it’s very important to provide the opportunity to be creative to people of all ages.
As someone who worked at the public library when I was in high school many decades ago, it is great to see the public library maintain its status as a center of learning and catalyst for community change. Back before Google and smart phones, the library is where people went for information and new ideas in the arts and sciences and humanities.
They are still places to connect and the perfect host for maker spaces. The collaboration of statewide entities with cooperation on the local level is both noteworthy and heart warming. It’s nice to know that libraries still play a vital role in community development and vision for the future.
Congratulations to the Governor and all involved for taking such a grassroots step forward.