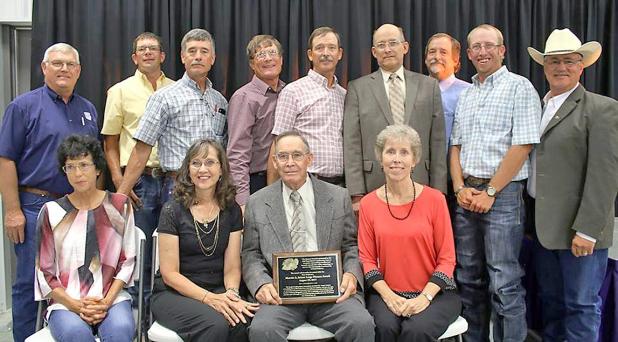 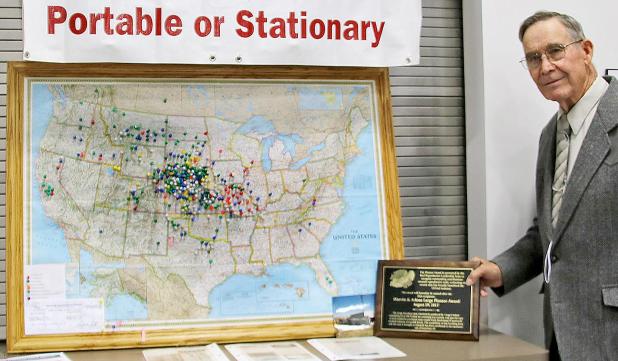 Marvin Large displays the plaque for the new award named in honor of him and his late wife, Arlene. The map represents the locations where Larges Breeding Barns have been sold in North America. (Courtesy photo)

The multi-state university-based Beef Reproduction Leadership Team presented its inaugural Pioneer Award Aug. 29 to Marvin and the late Arlene Large of Imperial.
The presentation was made    during the Applied Reproductive Strategies in Beef Cattle Symposium (ARSBC) in Manhattan, Kan.
Not only did the Larges receive the inaugural award, subsequent Pioneer Awards will be named in their honor—the Marvin and Arlene Large Pioneer Award.
The award was created to recognize outstanding contributions toward reproductive tools, technology or service that has broadly benefited the U.S. beef industry.
“No one may have contributed to the development and feasibility of fixed-time AI (artificial insemination) programs more than the Larges Breeding Barn,” said Willie Altenburg, Select Sires beef development advisor, during the award presentation.
“The breeding barn was in place when fixed-time insemination was a theory. It made fixed-time insemination a possibility,” he added.
Invented and produced by the couple, the Larges Breeding Barn was the tool needed by producers when results from fixed-timed AI protocols reached industry-acceptable levels.
The availability of the breeding barn and the ease it brought to timed-AI have been attributed to the increased use of fixed-timed AI.
Today, Larges Breeding Barns can be found in 31 states, Australia, Canada and Russia.
The family has sold a total of 497 barns, including 286 double-stall barns, 70 single-stall barns, 105 single-stall stationary barns, 20 double-stall stationary barns and four three-stall stationary barns. Two barns went to Canada, four to Australia and six to Russia/Kazakhstan.
During the awards presentation, Altenburg estimated more than 6 million straws of semen have been used to inseminate cattle in Larges Breeding Barns. This represents 12 percent of all semen sold during the past 25 years, according to the National Association of Animal Breeders (NAAB) and custom semen sales.
“The breeding barn has been a game changer for AI business growth in the last 25 years,” Altenburg said.
More than 340 producers, veterinarians and representatives from the AI and pharmaceutical industries were in attendance at this year’s ARSBC.
The Beef Reproduction Task Force, together with the national Beef Reproduction Leadership Team, work to promote wider adoption of reproductive technologies among cow-calf producers.
This includes educating cow-calf producers in management considerations that will increase the likelihood of successful AI breeding; and educating producers in marketing options to capture benefits that result from use of improved reproductive technologies.
The group’s mission is to optimize the productivity and improve the profitability of cow-calf operations by facilitating the adoption of cost-effective, applied reproductive technologies.
The Beef Reproduction Task Force is a multi-state extension activity in cooperation with the North Central Agriculture and Natural Resources Program Leaders Committee and the Cooperative State Research, Education and Extension Service.
The Beef Reproduction Task Force is made up of specialists from land-grant universities located in Nebraska, Iowa State, Kansas State, South Dakota State, Florida, Idaho and Missouri.