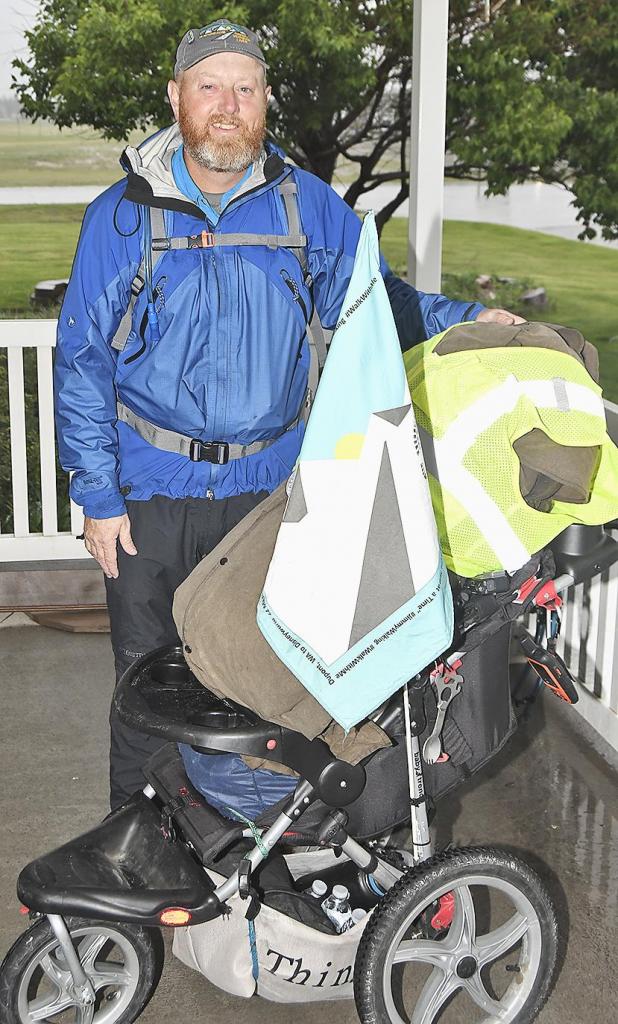 Sergeant First Class Jimmy Novak stopped in Imperial during his walk across America to raise awareness for veterans’ PTSD. His journey began on March 22 at his home in Dupont, Washington and will end on Aug. 22 at Disney World in Florida. (Johnson Publications photo)

Sergeant First Class Jimmy Novak, 42, arrived in Imperial on Monday on his walk across America to raise awareness for veterans’ PTSD (post traumatic stress disorder) and suicide.
His journey began on March 22 at his home in Dupont, Washington and will end on Aug. 22 at Disney World in Florida.
After 21 years with the U.S. Army Chemical Corps, Novak wanted to do something to mark his retirement.
On average, 22 veterans take their own lives every day.
Novak struggles with anxiety and depression, and during his first deployment, those struggles morphed into suicidal thoughts.
He had a lot of survivor’s guilt, as his job was relatively safe while others were in combat.
On Dec. 21, 2004, he asked his commander if he was ready for lunch.
“In a minute,” the commander responded.
Minutes later, a suicide bomber entered the chow hall, killing 22 Americans and himself.
“If he had agreed to go when I asked, we would have been there,” said Novak.
He didn’t process what happened well, and because of his support position, he didn’t feel justified in the emotional response he was having.
Although the Army pushed seeking help, he didn’t feel comfortable doing so, and therefore internalized everything.
“I was worried what my peers would think of me, I was worried about career implications, I was worried how it would affect my security clearance, all these different things. So I did what a lot of people do, and just crammed everything down,” he said.
He began having nightmares and suicidal thoughts, eventually developing a plan to end his life.
“I really don’t know what snapped me out of it. I just know whatever internal signal I was waiting for never actually happened,” he said.
After deployment, he reintegrated with his family but still didn’t share what he was going through.
He related it to tinnitus, sometimes the ringing in the ear is extremely loud, and sometimes it can’t be heard at all, but it’s always there.
He said for the most part the thoughts went away, but resurfaced when he became a recruiter.
As he approached retirement this year, he said all the things he’d been cramming down since 2004 began coming up. He’d catch himself weeping at unexplainable times and avoiding conversations and situations with peers.