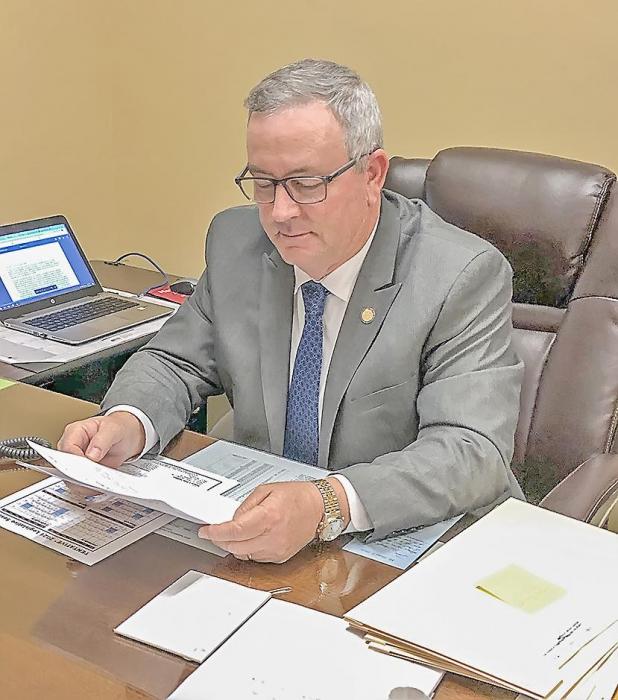 Courtesy photo
Sen. Dan Hughes of Venango was reviewing materials Monday in preparation for the beginning of a new Legislative session.

When the 107th Nebraska Legislature convened Wednesday for its two-year session, it marked the start of the final two years of 44th District Sen. Dan Hughes’ second term.
That means when the session is completed in the spring of 2022, Hughes, who farms near Venango, will be term-limited out of the Legislature.
Nebraska’s adoption of term limits caps the number of consecutive terms at two.
If senators want to return to the Legislature, they must sit out four years before running for the seat again.
In fact, three senators taking office this year were term-limited out and won election again. These include Sen. Ray Aguilar of Grand Island, Mike Flood of Norfolk and Rich Pahls of Millard.
Five other newly elected senators were sworn in, as well.
Executive Committee
On the opening day, senators elect committee chairs as one of their first official duties.
For the past four years, Hughes has served as the chair of the Natural Resources Committee.
That committee has played key roles in water legislation during Hughes’ tenure in the Legislature.
But for his final two years, Hughes is seeking the chairmanship of the nine-member Executive Committee.
One of the key duties of this committee is to assign all newly introduced bills to one of the standing committees of the Legislature.
This committee includes senators from all three Congressional districts to provide equal representation.
With the completion of the 2020 census, the Executive Committee is responsible for appointing members to the redistricting committee.
That committee looks at census figures to determine legislative district boundaries.
The 107th Session will not include Sen. Ernie Chambers of Omaha. He was initially term-limited out of a seat he’d held for 38 years.
After four years sitting out, Chambers returned for another eight years, making him the longest serving state senator in Nebraska history at 46 years.
Over the past six years, Hughes has fought his own battles with Chambers while finding him to be supportive in other efforts.
So what will it be like without Chambers in the Legislature?
“Good and bad,” Hughes said.
“He did look at bills through a different set of glasses than the rest of us, and caught some things that we probably should have caught,” Hughes added.
But one thing’s for sure—the business of the Legislature should move at a much smoother and faster pace, Hughes said.
Hughes said Chambers’ strategy was to string bills out until it got close to the end of the session.
“And you know, that gave him more negotiating power,” the 44th District senator said.
Hughes is so optimistic that  things will run smoother that he thinks they could get their business done without needing all 90 days in the first session.
Ending early would save the state a lot of money, too, he said.