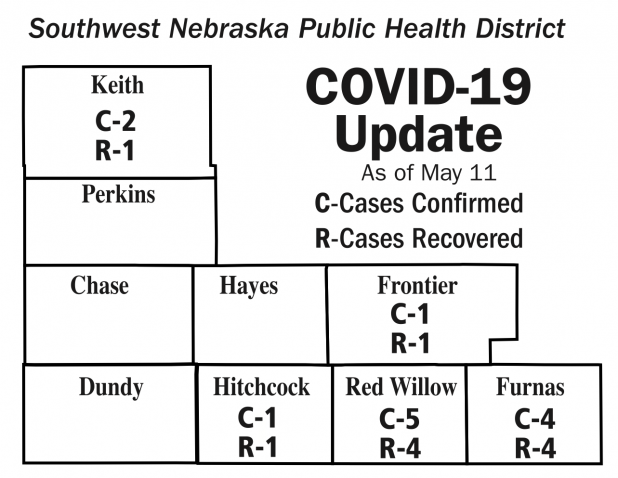 Courtesy Graphic
The Southwest Nebraska Public Health District shows where the 13 confirmed cases are located, along with recoveries.

While the state surpassed the 100-mark the past week in COVID-19 related deaths, Chase County remains one of 26 Nebraska counties without a confirmed case.
The state’s 103 deaths as of Wednesday morning grew from last Wednesday’s 82 reported deaths from the virus.
Likewise, the state’s confirmed COVID-19 positive cases was at 8,692 on Wednesday, up from last week’s 6,438.
This shows 1.2% of the confirmed cases has resulted in a death in Nebraska.
In the Southwest Nebraska Public Health Department’s (SWNPHD) nine counties, confirmed COVID-19 cases grew by just two, from 11 last week to 13.
One of the new cases came in Red Willow, reported last Thursday, and a second case was recorded in Keith County on Friday.
Four counties in southwest Nebraska’s SWNPHD—Chase, Perkins, Dundy and Hayes counties—all remain free of COVID-19 cases.
Douglas County, which includes Omaha, returned to the top of the list for most positive cases in Nebraska.
On Wednesday, Douglas had recorded 1,668 cases. Dakota County in northeast Nebraska has 1,362, while Hall County (Grand Island) has 1,344 positive cases.
Gov. Ricketts: Test Nebraska
Gov. Ricketts continues to encourage people to take the TestNebraska.com assessment.
Here’s a recap of the Test Nebraska test results:
So far, 2,943 test results have been received and 100 people have tested positive.
As of Tuesday, Test Nebraska teams had swabbed 1,233 people. On Friday, the Grand Island testing team will be in Lexington.
More mobile testing sites will be announced in the near future.
More testing slots will be opening up, so Ricketts encourages people to be patient.
As a reminder, Test Nebraska testing is by appointment only.  Don’t just show up to the testing site.
Residents can take the assessment at TestNebraska.com and then schedule a time if selected to be tested.
Town hall Thursday
Gov. Ricketts will again appear in a town hall question and answer session tonight (Thursday) at 7:30 p.m. MT
Residents can view the town hall online at the 10/11 News site: 1011Now.com or live on the 10/11 television station out of Lincoln.
Ricketts will also have a press conference Friday at 1 p.m. MT also aired on 10/11 News.
He has daily press briefings Monday through Friday, two of which are in Spanish. Schedule information is on the governor’s website at: governor.nebraska.gov.