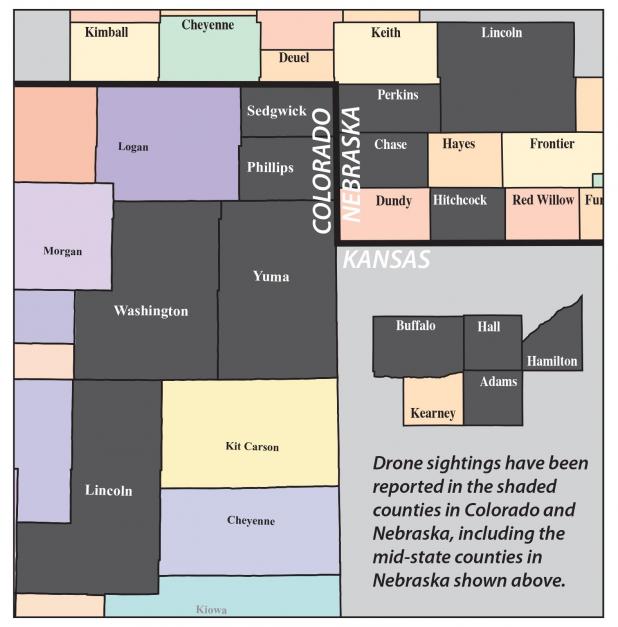 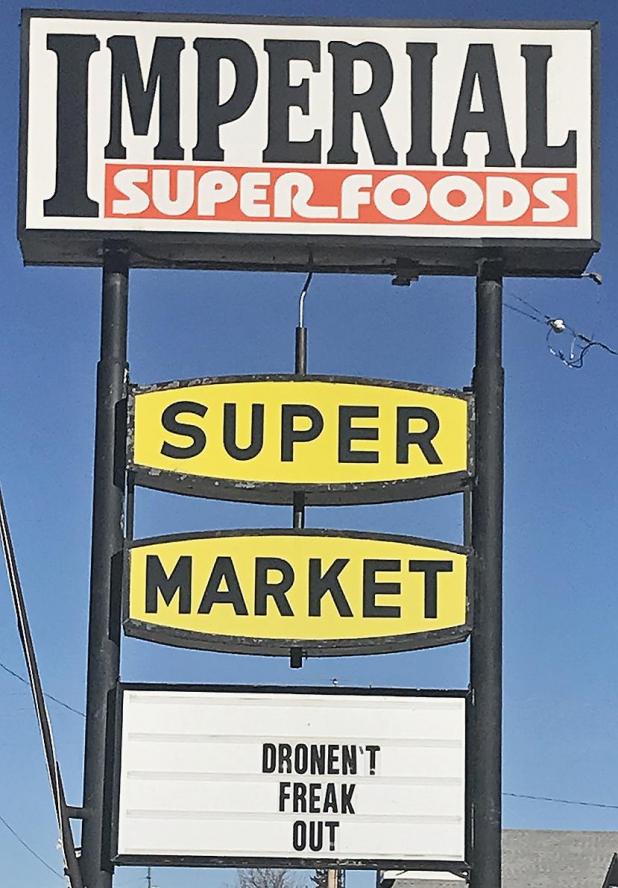 There is a lot of local interest in the drone sightings. Super Foods updated its marquee last week saying “Drone’t freak out.” (Johnson Publications photo) 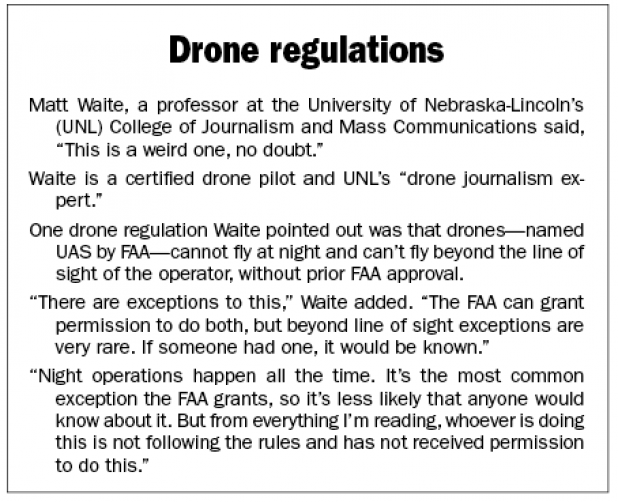 Drone sightings in Chase County continue to be reported to authorities, Chase County Sheriff Kevin Mueller said.
The Federal Aviation Administration (FAA) outlined actions taken after a meeting of various agencies on Monday in Colorado.
The statement reads: “We take every drone-sighting report seriously. Multiple FAA divisions are working closely with federal, state and local stakeholders to determine whether the reported sightings in Colorado and Nebraska are drones and, if so, who is operating them and for what reason. Earlier today (Monday), various agencies met and shared information about how to effectively collaborate. The FAA has taken a number of actions:
—Contacted FAA Unmanned Aircraft Systems (UAS) test sites, drone companies and companies that are authorized to operate drones in those areas. We have not determined the source of the reported drone flights.
—Contacted General Aviation airports in the affected counties to ensure they are aware of the sightings; to ask pilots to be cautious and to report sightings; and to report any people they see operating drones.
—Working with federal and local law enforcement and national security partners to discuss ways to identify who may be operating these aircraft.
It continued, “We will continue to collaborate closely with our partners at the federal, state and local levels on our identification efforts.”
Mueller attended the meeting, held in Brush, Colorado, and said there were “approximately 75 people from 20-25 different law enforcement agencies along with FAA personnel and the FBI present.”
“During the meeting a task force was organized which will help in sharing resources and information about the drone sightings,” Mueller added.
A statement released by the sheriff’s office on their Facebook page said deputies have been investigating drone sightings since Dec. 28.
The drones in question aren’t toys.
“We’re estimating a five or six-foot wingspan,” Mueller said. “Apparently, there’s a couple that appeared to be larger, about a 12-foot wingspan on those. They’re not your average, everyday hobbyist, run-of-the-mill drones. They’re obviously high-tech, very expensive drones.”
With one exception, sightings have been at night. Mueller said they seem to start after sunset, peak between 8 and 10:30 p.m. and then slow down, although there are some reports of late-night sightings.
They are almost always seen in groups; the largest group reported was 15, he said.
The drones are estimated to be flying at 300 to 500 feet, and perhaps traveling at 40 to 50 mph.
“I don’t know how accurate that is, because it’s hard to judge the speed of something that’s up in the air,” he said.
There are lights on the drones, but they are not shining lights onto the ground below, he said.
It’s difficult to tell what the drones are looking at, because their flight paths vary, he said.
“They’ve not really done anything. Sometimes they move in a pattern, sometimes it’s a sporadic pattern. There’s no rhyme or reason to how they’re moving. (Sometimes) they seem like they’d be doing a grid pattern, and sometimes it’s just a random pattern,” he said.
“We get calls into the 911 center, social media and calls on our cell phones, but I can tell you it’s almost daily that we receive multiple calls of drone sightings,” Mueller said.