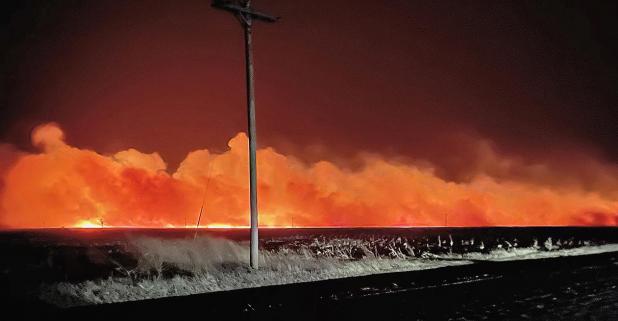 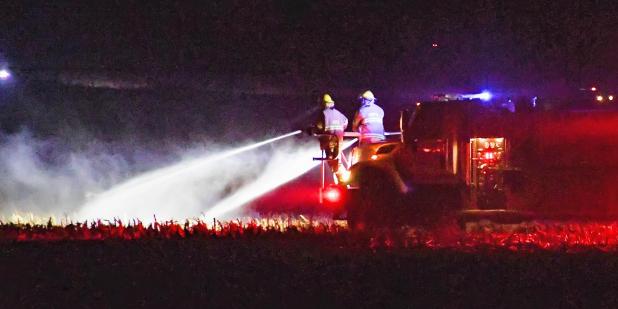 Close to midnight, firefighters from Imperial battle the grass and field fire, northwest of Imperial. The fire, starting just after Imperial’s power outage, was a challenging one due to the wind. It was he first of four fire calls for the IVFD last week. 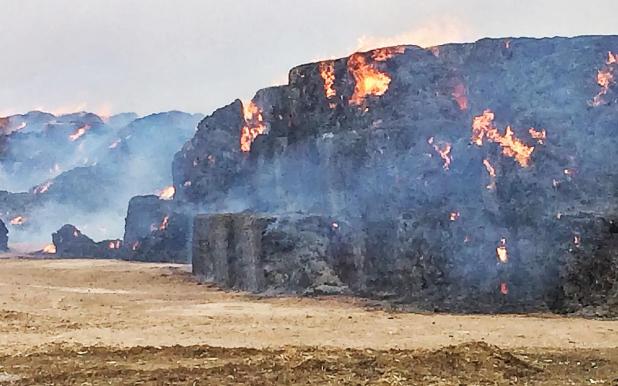 Courtesy Photo
Stacked bales burned at Imperial Beef in a Thursday afternoon fire last week. An estimated 750 bales were lost in the blaze.

Evacuating Imperial had crossed the minds of Chase County’s Emergency Manager and Imperial fire officers last week as high winds pushed a grass fire to the northwest edge of town.
“Right after I was on scene, it crossed my mind,” said Duane Dreiling, the county’s Emergency Manager.
He said if it had been mutually agreed upon with the fire department, evacuation would have happened.
But, almost miraculously, Dreiling and Fire Chief Doug Mitchell both said the estimated 50-60 mph winds last Wednesday night were cut in half.
That was vital as the fast-moving fire was under control by the time it reached the highway, according to their reports.
The Jan. 13 fire, starting near the Max and Joni Kaiser farm, was just one of four calls the Imperial Volunteer Fire Department (IVFD) answered over a two-day span last week.
All of them were worsened by consistent high winds that peaked as high as 71 mph on Friday.
Mitchell said Kaiser’s was one of the most potentially threatening fires to the city that he’s been involved in.
“It ranks pretty high on my list,” he said.
Imperial’s neighbors to the south in Benkelman weren’t so lucky.
They had an even more dangerous fire early Friday morning.
People were evacuated from the hospital, nursing home and residences in Benkelman as high winds again kicked up a grass fire, pushing it toward town. The IVFD sent trucks and personnel to that fire.
In between, however, Imperial, with the help of several other fire departments, fought two other fires at Imperial Beef and in a very southwestern section of Chase County.
Kaiser fire
When Imperial firefighters arrived at the Jan. 13 fire, just two and a half miles northwest of Imperial, it was difficult to know how bad it was because of the wind.
Second Lt. Rick Elliott said smoke normally rises, but with the winds that night smoke was blowing sideways, making it hard to know how big it was.
The fire started from downed Highline Electric poles, a half mile west of Kaiser’s near the Dan Reeves property (old John Keil place).
Max and Joni Kaiser were evacuated from their home that night, Mitchell said.
“I was very concerned with the Kaiser home,” he said.
Winds were blowing in a southeasterly direction, near the Kaiser home and right toward Imperial.
It did reach Highway 6, and there were a few embers that jumped the highway into the south ditch, but they were quickly extinguished.
It didn’t advance from there, thanks to the dying winds.
The command unit with Mitchell and 1st Asst. Chief Brad Wheeler inside stayed north of the Kaiser home with several trucks to protect it, while 2nd Asst. Chief Kelsey Weiss took another unit to the south side of the fire for command on that end.
“We were lucky it was stopped before hitting Wanamaker (State Wildlife Management Area),” Mitchell added.        That area contains native grasses and trees, and would have been difficult stopping a fire in there, he said.
Other tree lines in the path of the fire were burned.
Highway 6 was closed down with Imperial police on the east side and the Chase County Sheriff’s Dept. stopping traffic on the west.
Mitchell said farmers in the area brought tractors with discs to create a fire line around the perimeter. That was a big help, he said.
In the end, close to 170 acres burned on ground owned by Kaiser, Dick Banks and Dirk Haarberg.