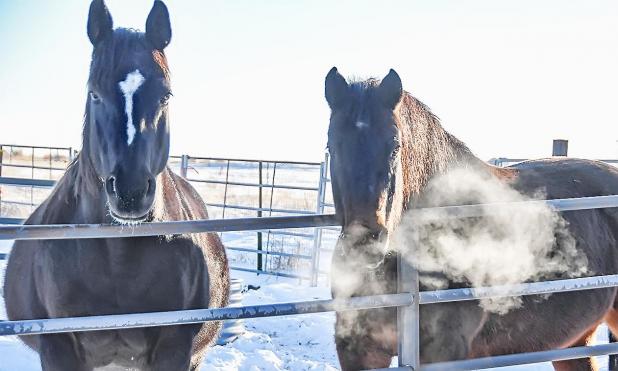 Jan Schultz | Johnson Publications
This pair of horses east of Imperial have some shelter from the cold and wind with a small barn nearby.

Animals, large and small, need vigilance in cold, too

For those ranchers dealing with newborns from first calf heifers right now, the recent frigid weather means some sleepless nights.
Troy Worth, DVM at Veterinary Services in Imperial, said taking care of animals on the ranch and at home is important right now.
Newborn calves are the biggest risk, he said.
While the height of the calving season hits in mid-March here, a lot of ranchers have been out the past several days with first calf heifers and their newborns.
“If they aren’t dried off in 30 to 60 minutes in this weather, their ears, tails and even their feet can freeze,” he said.
He said a lot of ranchers are out checking their fields every one to two hours, and if newborns are found, they’ll try to get them inside.
“Some ranchers are fortunate to  have barns and, if not, they’ll even bring them in their homes,” he said.
Worth said they did that themselves Monday when one of their newborn calves took up temporary residence in their house, just east of Imperial.
Drying them off with towels and even blow dryers helps, even putting them in backs of pickups will lower the cold effects, he said.
For those without inside options, Worth said a lot of ranchers will spread out hay in the field, and at least get them off the snow.
Moving them near natural windbreaks or stacking bales to make a windbreak are also options, he said.
“God made cattle to deal with the cold but this wind chill—that’s another whole element,” Worth said.
Losing a calf affects a rancher’s bottom line, as well.
The loss of one newborn means about $400 to $500, and they could be worth as much as $900 apiece in the fall, he said.
Other large and small animals also need some special care in these temperatures.
Horses can often deal with the cold a little better than cattle, he noted, but keeping them out of the wind and having feed in front of them are very important.
“A lot of horse owners will put blankets on them, or get them to windbreaks,” he said, if they don’t have a barn or other structures for wind protection.
Water is also important, as they need access to fresh, clear water. If water lines freeze and the owner doesn’t live close, “you hope you have some good neighbors,” he said.
Dogs and cats need some relief from the cold, as well.
For outside dogs, putting a heat lamp or a heated pad in their dog houses is a big help, he said.
The best option, though, is at least getting a dog onto the porch if not inside the home.
Outdoor cats, being smaller, can take care of themselves a little better, he said.
Due to their smaller size, they can get into trees or other covered areas and find dry places to lie down, he said.