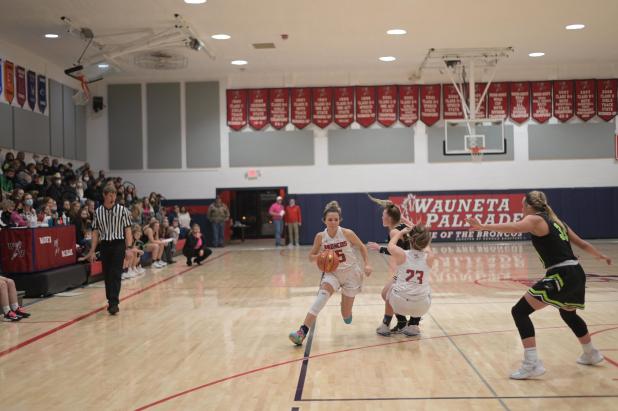 Diane Stamm | Johnson Publications
Cali Cox turns the corner against Maywood/Hayes Center as Peyton Cox gets fouled setting a screen. WP lost to MHC for the third time this season, but is looking for a rematch in next week’s subdistrict.

The Wauneta-Palisade girls’ basketball team wrapped up its final week of the regular season, splitting games with Rawlins County, Kansas and Maywood/Hayes Center.
WP’s week started off Feb. 9 at 7-9 Rawlins County.
The teams traded baskets over the first four minutes of the quarter. An Alexa Sandman jumper kicked off a 10-0 run for the Broncos. Peyton Cox and Cali Cox joined Sandman in the score column as WP took a 17-10 lead.
The Cox sisters made all of the Broncos’ shots from the floor in the second quarter. Combined with free throws by Payton Yearous and Zoey Boos, WP increased its lead to 28-16 at the half.
The Broncos’ transition game was hitting on all cylinders when WP stepped back onto the floor, making three straight layups.
“The key to the whole game was early in the third we got into transition and had some wide open layups that proved to be pretty important by the time the game got over,” Coach Cox said.
The quarter was evenly contested after the opening minute, but the Broncos maintained their double-digit lead, 46-36.
Rawlins County opened the fourth quarter with a seven point run to cut WP’s lead to 48-41.
Two baskets in the paint from P. Cox and a three pointer from C. Cox put the lead at 12 points, 55-43, with four minutes left.
The Broncos traded free throws with Rawlins County baskets over the next three minutes and watched their lead shrink to 57-52. Boos made a layup with one minute left to give WP the breathing room it needed in the 60-54 win.
“Our free throws weren’t great overall, but we made enough of them down the stretch to hold onto the lead,” Cox said.
He said his team played somewhat tentative at Rawlins County, especially early.
Playing without Haylee Sandman, Cox said it forced some girls to play more minutes than they were used to, sometimes in different roles than they were used to, as well.
“I thought we handled the situation very well,” he added.
P. Cox finished the night with 22 points and 23 rebounds. Her rebounding effort tied Faith Simpson’s school record.
C. Cox totaled 18 points. Boos and A. Sandman each scored eight.
A. Sandman and Chloe Stehno pulled down eight and seven rebounds, respectively.
The game came down to the charity stripe. WP made 10 of 21 in the contest while the Buffaloes only shot four free throws and made one.
Cox said Rawlins County was a big physical team and WP had its hands full keeping them off the glass, but he was happy with how strong everyone played inside.
The Broncos were hoping the third time would be the charm Friday when WP hosted 21-2 Maywood/Hayes Center.
A poor first quarter doomed the Broncos. WP only scored five points in the quarter while allowing MHC to put 21 on the board.
“The first quarter we were our own worst enemy,” Cox said.
Three three pointers from A. Sandman, Goings and C. Cox in the first three minutes of the second quarter closed the gap to 14-23.
WP struggled to get closer. Goings made a field goal and A. Sandman drained a three pointer, but it wasn’t until three points by Stehno in the final minute of that half that WP could get closer than nine points. The Broncos trailed 22-30 at halftime.
MHC extended its lead in the third quarter. Stehno, A. Sandman and P. Cox scored WP’s eight points in the quarter, leaving the Broncos behind 30-43 heading into the final stanza.
A. Sandman score WP’s first three points of the fourth quarter, but MHC went on a 7-0 run to leave the Broncos trailing 33-50 with five minutes remaining.
H. Sandman made four straight free throws and C. Cox a jumper to lead WP on a 6-2 run.