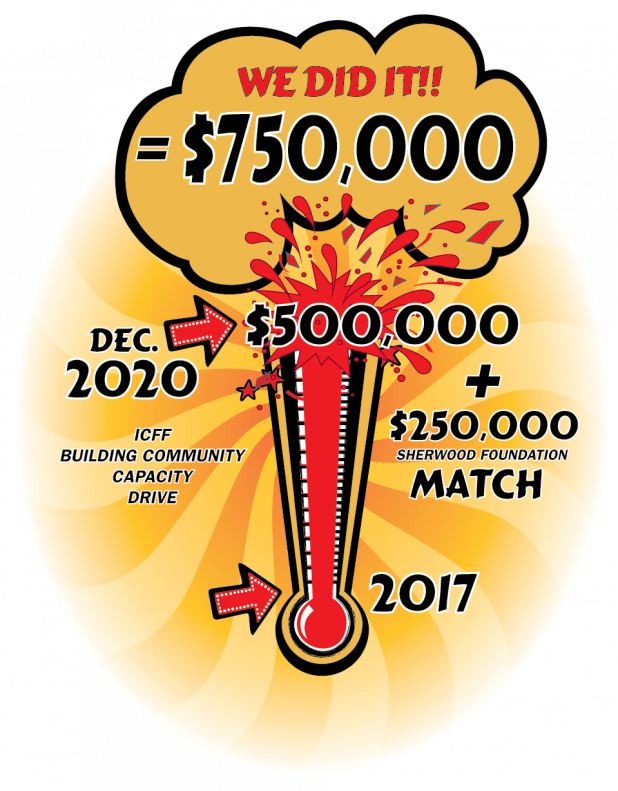 Johnson Publications Graphic
Mercury hit the top of the thermometer, designating the ICFF success in raising $500,000 for the foundation’s unrestricted endowment. The success earned a $250,000 match from the Sherwood Foundation.

“WE DID IT, WE DID IT, WE DID IT!!!
That was the message sent by Treasurer Doug Gaswick to the Imperial Community Foundation Fund (ICFF) advisory committee when collected donations surpassed the $500,000 campaign goal just weeks before the Dec. 31 deadline.
That assures a Sherwood Foundation offer in the four-year challenge to match 50 cents on the dollar up to a $250,000 maximum.
“Reaching our goal for the Building Community Capacity Campaign opens a lot of doors with new opportunities for our community,” said ICFF Chair Tyler Pribbeno.
“It’s only the beginning for what we can do together,” he added.
Although the campaign goal was reached, Pribbeno emphasized it isn’t the end of the importance of continuing to grow the endowment fund to make a difference for generations to come. The larger the endowment, the larger the annual payout to build a better Imperial, he said.
ICFF has granted more than $519,000 from investment earnings since organizing.
Growth from the recent campaign brings the current unrestricted endowment investment to over $1.2 million.
“I am so proud of our community and our fund advisory committee members for reaching the goal,” said Elizabeth Haarberg, who served as committee chair for the majority of the campaign.
“Despite tough agricultural times and the unprecedented COVID situation, the community came together and delivered. It is really a testament to the strength of the love and commitment to this community,” she added.
Gaswick provided an updated list of more than 300 donors who made the success possible. They extend far beyond the local area and came with acknowledgement of fond memories and ongoing valued ties to the area.
Donations other than cash included estate gifts and gifts of grain and cattle.
The campaign was kicked off in 2017 with more than $100,000 in personal pledges from the fund advisory committee members.
It was important to show personal commitment before asking others to do so, according to Pribbeno.
Others serving as committee members during the campaign other than Pribbeno, Gaswick and Haarberg include Elna Johnson, Jane Moreland, Brenda Ledall, Tanna Hanna, Brianna Pribbeno, Charley Colton and Lori Pankonin.
Dillon Harchelroad served the first year. Johnson and Moreland moved to ex officio status earlier this year when Joel Gockley and Linsey Foote accepted committee responsibilities. Hannah Meeske served as a student representative as well as a summer intern.
The Imperial Community Foundation Fund was established in 1999 as an affiliated fund of the Nebraska Community Foundation. As of Sept. 30, 2020, total assets were $1.6 million.