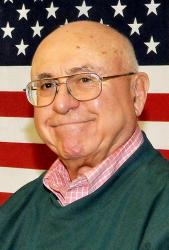 ■ Editor’s note: This is one in a series of stories on longtime school and town board members in Imperial and Wauneta who have stepped down from their positions.

Ask anyone around Wauneta, the village has no bigger cheerleader than Tony Cribelli.
Cribelli first ran for the Wauneta Village Board of Trustees and served from 2001-2005.
“Everyone has a civil duty,” Cribelli said, whether that may be on a school, village or church board.
Cribelli was appointed to the board in 2007 and continued to serve until December 2020.
He served as chairman or vice chairman for most of those years.
He ran again in 2011 but wasn’t going to run for a third time. After receiving encouragement around town, he ran as a write-in and was re-elected.
During his time on the board, he feels the nursing home is the biggest challenge the village has faced.
“We didn’t have a clue how to operate it when the town bought it,” Cribelli said.
He credits the “tremendous employees” at Wauneta Care and Therapy Center for the work they do and how they helped the board get and stay educated on running the facility.
He’s also proud of the improvements at the Wauneta Community Center. When $25,000 was needed for HVAC improvements, Cribelli and the village raised $33,000 and was able to make improvements to the courtyard, as well, with new fencing.
Now, Cribelli said he’s run out of gas.
The board appointed Crystal Walgren to take Cribelli’s board position. Village Clerk Evelyn Skelton said it’s been nice to have a fresh face asking new questions.
“Tony is one that truly loves his community. I also love my community and feel honored to be a part of this team,” Walgren said.
Cribelli is extremely grateful for the work Skelton and village superintendent Bill Bischoff do. He said two of his best motions  while on the board were to hire the pair.
With Bischoff and Skelton doing their work well, Cribelli said the board has only needed to set the policy and let their employees do their jobs.
“I have really enjoyed working with the village employees and seeing the interest they take in their jobs,” Cribelli said.
He’s served with some really good board members, as well, he added.
“Overall, the boards have done a good job,” he said.
Looking back on the years he served, Cribelli said he appreciates the confidence people had in him.
“Wauneta is a wonderful town. It was a great town to raise our family in,” he said.