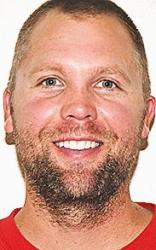 His passion for firefighting has taken Imperial’s Kelsey Weiss to the next level.
He was hired earlier this year by Lite ‘Em Up Custom Burning, Inc., and got his first experience a couple weeks ago in the Pedro Mountain fire, about 40 miles northeast of Rawlins.
Weiss got the call three days after the fire started Aug. 24 from a lightning strike. While it’s now under control, on Sept. 1 it had already burned more than 19,000 acres.
However, he didn’t get much wildfire firefighting in, he said.
“I was put on the night shift, watching structures to make sure the fire didn’t impede them,” he said.
He missed out on the daytime firefighting, he said. He was one of three on the crew there from Lite ‘Em Up.
Weiss decided to apply for the occasional work after seeing the position advertised by Lite ‘Em Up Custom Burning, Inc. He’s attached to a crew based out of Seward, which keeps fire units in both Gering and Seward.
The company contracts with the federal government to provide additional help to local fire departments when fires like Pedro Mountain get out of hand.
“This was something I always wanted to do,” Weiss said.
“Just being on the IVFD has gotten me passionate about this,” he added.
However, training had been scarce in this area.
But when a Red Card Certification training was scheduled in Ogallala last year, he signed up after getting the okay from his wife, Kym. Several others on the Imperial
Volunteer Fire Department also completed the training.
It was a 40-hour class completed over two weekends.
When he go the call for Pedro, and had to say good-bye to his two young sons, he said he realized he wasn’t the tough guy he thought he was.
He said he and Kym have together left the boys, Preston, 4, and Braxtyn, 7, before, but that  was the first time he went off and had to leave all of them on his own.
There were some tears from both his boys and himself, he said.
He said he appreciates the support Kym has provided allowing him to do this, as well as that from his employers at Troxell’s Heating and Appliance.
Over the weekend, Weiss was waiting for a call to be sent to fight the Fishhawk Fire near Cody, Wyoming.
However, rain helped get that fire under control and he did not go.
Weiss is a 15-year IVFD member and is currently 2nd lieutenant and is also a member of the dive/rescue and ropes teams.