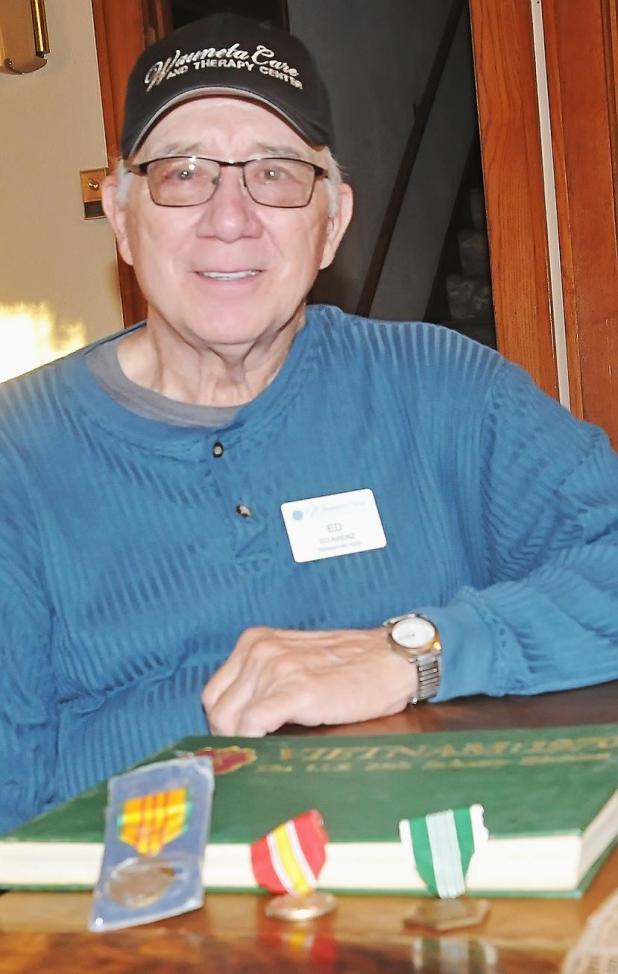 Ed Arenz of Wauneta is one of those people for whom Nov. 11 holds special significance.
Arenz, 72, is a Vietnam vet.
The Wauneta native has kept in touch with his military side as adjutant of Wauneta’s American Legion Post and a member of the village’s VFW Post, too, where he was one of the founding members.
The reason for his membership is simple. “You’re dedicated to the country,” he said. “(It was) an honor to serve your country. I like to see updates, what veterans are doing across the United States.”
Like many of those who went to Vietnam, it wasn’t originally his idea; it was Uncle Sam’s. He was drafted into the Army in December 1969, shortly before the draft was switched to a lottery system, and trained at Fort Leonard Wood, Missouri, and Fort Sill, Oklahoma.
His original specialty was as an artillery mechanic.
He arrived in Vietnam in June 1970, serving in Cu Chi with the 325th Infantry Division. Shortly after his arrival, the troops were gathered together and asked who among them had studied college-level accounting. Arenz raised his hand and was instantly converted into a battery clerk.
“I was pretty much in the rear areas most of the time,” he recalled. But Cu Chi was close enough to the fighting that “we used to get incoming rockets almost nightly.”
Nobody in his unit was killed, although some were wounded, a fate Arenz himself escaped.
He left Vietnam in June 1971. He was able to muster out without serving a full two-year tour because he extended his original time in Vietnam by a brief period, earning him the early release.
He returned to Kearney and his wife, Jo, eventually moving back to his Wauneta hometown in 1976. They’ve been there ever since.
He didn’t join the veterans’ organizations right away, since as a salesman and truck driver he wasn’t in town much. But as life went on, he sought the company of fellow veterans