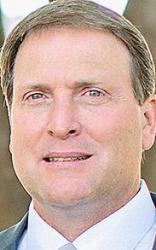 Funeral services will be today (Thursday) in Wauneta for longtime resident and businessman Brian Harchelroad, 52, who died Friday at Medical Center of the Rockies in Loveland, Colorado.
The services will be at 10:30 a.m. in the Wauneta-Palisade High School gymnasium, with David Wynn officiating. Burial will follow at Riverside Cemetery in Wauneta.
LuAnn Rector, office manager at the Harchelroad Motors dealership in Wauneta, said Harchelroad spent his entire career with the business after graduating from college and was serving as the company’s president.
“He was great to work with,” Rector, who worked with him for 22 years, said.
“He was very honest, straightforward. A very caring man. He cared about his employees, their families, the community, and he cared about his customers.”
Harchelroad also was heavily involved in the community. He was on the boards of both the Chamber of Commerce and the local clinic and was with the Bronco Boosters.
Rector said the business will continue despite the loss of its president.
“We’re a going concern,” she said. “His nephew Dillon is here. Dalton has said when he comes back from school, he wants to be here. This next generation is stepping up and we’ll continue.”
Harchelroad Motors also operates a dealership in Imperial.
Visitation was set for Wednesday afternoon at Liewer Funeral Home in Wauneta.
Harchelroad is survived by his wife, Michelle; daughters Dawnta Morrison, Lincoln, and Sydnee Harchelroad, Omaha; son Dalton, Wauneta; sister Debra Kemp, St. Louis, Missouri; sister-in-law Carol Harchelroad, Imperial; and mother-in-law Jan DeWester, Wauneta.