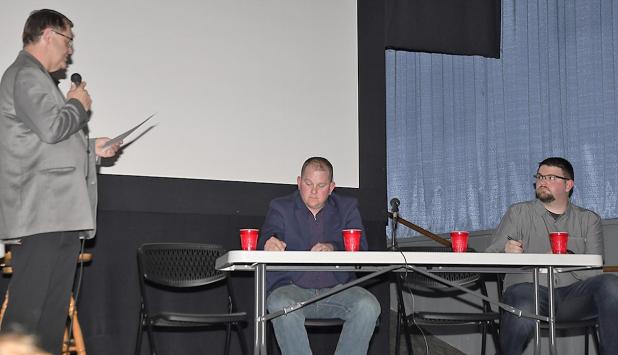 Close to 100 people were able to hear the views of county treasurer, county commissioner and Imperial mayoral candidates at a town hall forum Monday night.
Asking questions posed from the crowd, Russ Pankonin moderated the program that opened with an hour of questions for two candidates for mayor.
A second hour introduced the two county treasurer candidates to the audience, and seven who are seeking a county commissioner seat.
Incumbent Mayor Dwight Coleman did not attend due to a Manor board meeting and another family event Monday night.
None of the five Imperial council candidates attended, two who are incumbents and three new candidates. Council incumbents are Charlesa Kline and Chad Yaw. Others seeking a council seat include Craig Loeffler, Blake Moreland and Darcy Moreland.
Questions to mayoral candidates Preston Smith and Mason Holmes touched on child care, city government experience, goals, budget spending/savings, the theater, cemetery, broadcasting council meetings and better working relations between the city and county.
Goals for Smith, who owns Imperial Auction Market, include a close look at the budget, streets, drainage and sanitation and how to make those areas better.
“My biggest goal is getting back to our roots, and how the city can help businesses in this community. I’d visit with each business and ask how can we make things better,” Smith said.
With an eye on keeping the quality of Imperial high, Holmes said he would like to see the city get a hold on spending and examine what is being spent and why.
His goals include taking a look at what Imperial has now and making it better with upgrades to current facilities, including the theater.
Noting a continued shortage of child care in the community, the first question to candidates asked if the city should be involved in it and their vision.
Holmes said he didn’t believe the city should be involved and compete with the private sector, while Smith alluded to the possible use of economic development funds to help the situation, but did  not favor the city helping operate a daycare business.
Relations between city and county officials were brought up in a question, which asked candidates’ thoughts on working together.