From their “Recipe for Freedom,” these young ladies produced an American flag for the K-4 program Friday. (Johnson Publications photo) 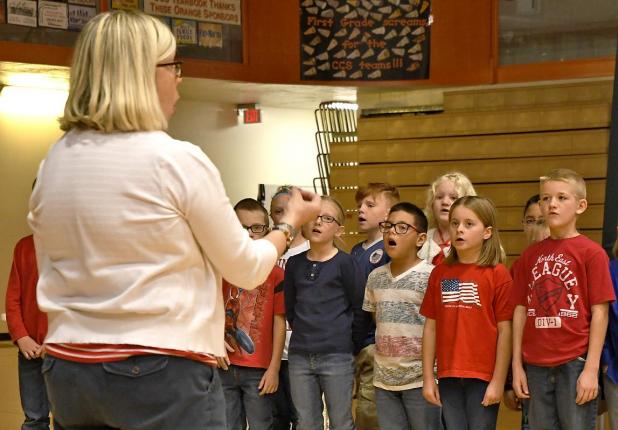 Music Director Jodie Liess directs the second grade class as they sang “In Service of our Country.” (Johnson Publications photo) 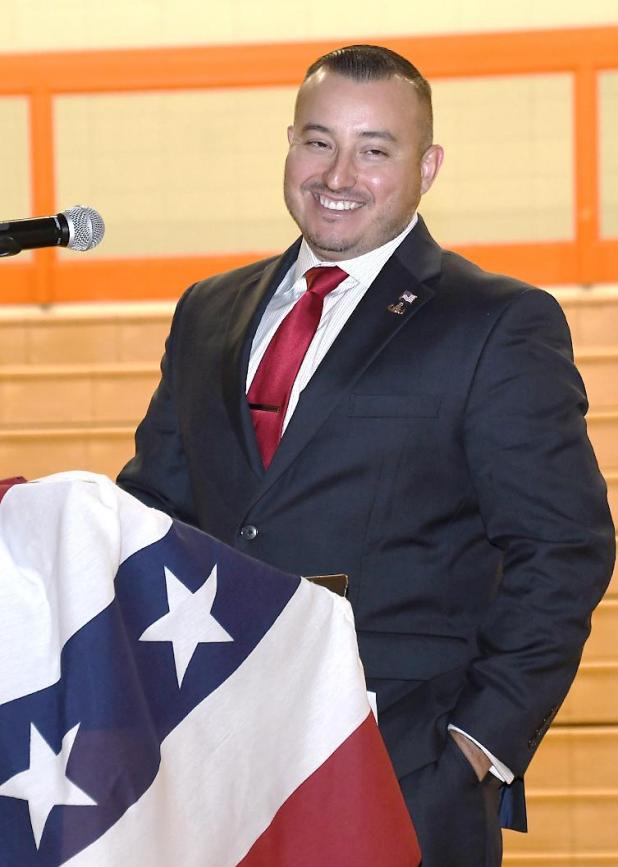 FBLA program speaker Eric Gonzalez told students at both programs they have opportunities to be heroes every day. (Johnson Publications photo)

Eric Gonzalez told students at a pair of Veterans Day programs on Friday that some of the things they can do everyday are heroic.
As the military lives by a code including words like honor, courage, integrity, sacrifice, discipline and responsibility, students can live by the same code, he noted.
“Let me tell you, living by these values is what really makes a hero, not deployments, not combat, not how many bombs you diffuse or how many people you have killed,” Gonzalez said.
Being truly heroic is serving your country, or your community, “through honesty, integrity and hard work.”
Gonzalez was the guest speaker at two FBLA-sponsored programs at Chase County Schools on Friday. The morning program was geared to grade 5-12 students, while the afternoon program drew students in K-4.
Gonzalez served 16 years in the U.S. Marine Corps and was an Explosive Ordnance Disposal Technician. He was deployed five times and fought in two wars.
His wife, Jennifer, is a middle school science teacher at CCS. The moved to Imperial earlier this year.
He emphasized in his morning and afternoon speeches that he sees students every day who are heroes.
“I see kids who work hard every day for that A, who fight for that touchdown on the football field, who dive for that ball on the volleyball court.
“I see students who take care of others when they are having a hard time,” he said.
“Doing the right thing when nobody is looking, that is heroic,” he added.
He encouraged students to never be afraid to challenge themselves, never be afraid to do the right thing and never be afraid to help those less fortunate.
“And most importantly, never be afraid to show your patriotism, or to stand for the pledge of allegiance or the national anthem,” he said.
At both programs, Gonzalez read a short poem he wrote titled, “I am a Veteran.”
A very important part of each program was the introduction of local veterans attending. Each stood as their years of service and what military division in which they served were read by FBLA members Lauren Prior and Jim Sims.
Each program also included the advancement and retirement of colors by the Imperial VFW Post 4688 Color Guard.