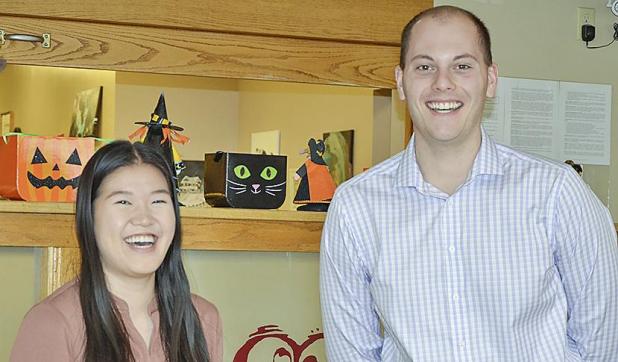 Chase County Community Hospital/Clinics (CCCH) are hosting two medical students on rotation currently.
Mitch Misfeldt is a third year medical student at the University of Nebraska Medical Center in Omaha (UNMC).
He is halfway through a  two-month rotation. His graduation is scheduled for April 2021.
Misfeldt is originally from Blair and is the eldest sibling of three­ with twin sisters.
He entertained the idea of going into the field of medicine while in high school, but chose to pursue a degree in engineering in the beginning.
He said he began to realize he missed having regular interaction with people and decided to turned towards a medical career.
“I like problem solving, which either career provided. But I wanted to be involved with people, too,” Misfeldt said.
“Here we are eight years later,” he added.
He hasn’t decided on what field of medicine he wants to specialize in, but he does want to stay in Nebraska.
Misfeldt stays in shape by running at the high school track most mornings.
On weekends, he enjoys pheasant hunting, he said.
PA student also on rotation
Josephine (JoJo) Ngo is originally from Boise, Idaho.
She is the middle child of three girls, with all three living in Omaha.
Her parents still live in Boise.
Ngo is also a medical student at UNMC pursuing a Physician’s Assistant (PA) degree.
Her rotation at CCCH will be for three months, ending in December.
She is undecided on what area of medicine she would like to concentrate on.
This is her first rotation, so it’s pretty open right now, she said.
“The nice thing about being a PA is you can switch fields if you want without additional schooling,” said Ngo.
She is very excited to be graduating in December 2020.
Ngo is talented in several other areas, as well.
She belongs to a PA book club and reads nonfiction books related to the medical field.
“I also enjoy reading historical fiction novels,” she said.
But her interests don’t stop there.
Ngo is accomplished on piano and acoustic guitar.
“I am learning how to play the ukulele,” she added.
When not busy with school, reading and music, Ngo said she loves to write.
“I have written some fiction, but mostly I write about personal reflection,” she said. “I enjoy traveling and writing down my experiences and thoughts about the places I have been.”
Her family has gathered a great deal of information about their history, so Ngo has taken on the task of organizing and writing the history of her family,  she added.