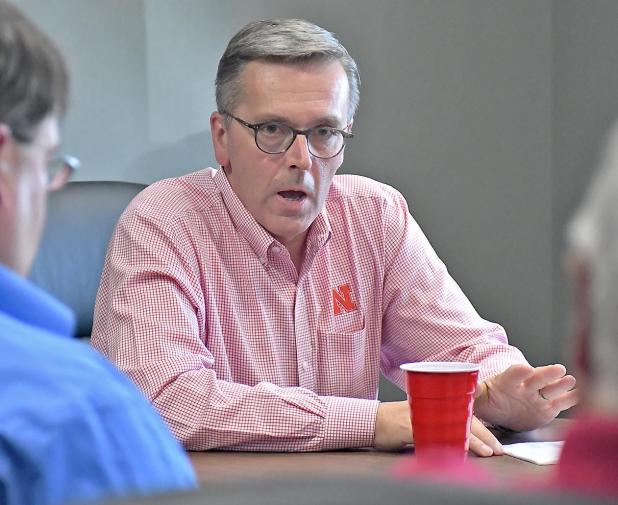 University of Nebraska Chancellor Ron Green visited with local civic, community and school leaders during a visit last Thursday during the Chase County Fair.
About 20 people gathered at the new county building to hear Green talk about the mission of the university.
Green said he likes to visit communities throughout Nebraska annually to get feedback on what the university is doing right or wrong. Other UNL officials are encouraged to do the same, he noted.
“It is very important for me to kind of have a sense and understanding of what and how the university is seen in the state,” he said.
This allows him to see if the university is meeting its mission for the state and to hear about things that aren’t being worked on or provide an opportunity for improvement.
Green said he’s proud that Nebraska has kept to its roots and continues to support Extension throughout the state.
He said many of the land grant institutions have reduced support or discontinued Extension services.
He said that outreach and extension is a critical mission in serving the people of the state.
Record growth continues
When classes began this week, he said it would mark the fourth year in a roll for record enrollment at the university.
Last year, the university graduated more students than in any previous year.
He said they are predicting record enrollment in the mid 26,000s this year.
Right now, the university is the second smallest in the Big 10 Conference. Northwestern, a private school, has around 21,000 students.
Ultimately, he  can see growing enrollment to the low 30,000s. While that may seem big, he said, it doesn’t even compare to an Ohio State that has almost 70,000 students, or Michigan with more than 50,000 students.
He said they have students from all 50 states and 130 different countries. He noted that 65 percent of all students still come from Nebraska.
He noted that 25 percent of enrolling freshmen are first generation college students, meaning they are the first in their family to attend college.
Funding

To read more on Green's visit and other stories, please log in or subscribe to the digital edition. https://etypeservices.com/Imperial%20RepublicanID359/