A stock tank from Bomgaars was damaged from high winds during the storm on Sunday. (Johnson Publications photo) 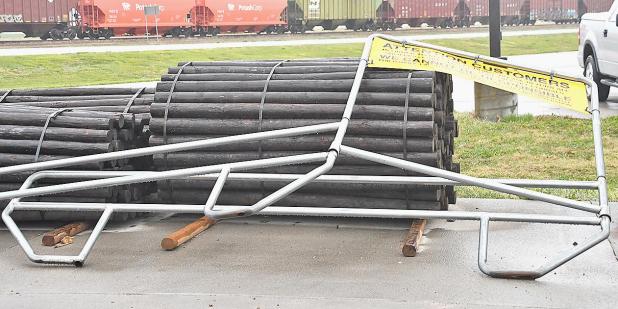 The cart corral at Bomgaars sits to the side of the parking lot on Wednesday. A stock tank taken by high winds during Sunday’s storm damaged the corral. (Johnson Publications photo)

The Imperial Republican
A handful of businesses experienced some damage during the thunderstorm and winds early this week.
Sunday’s storm brought hail and high winds. Those winds sent multiple Bomgaars stock tanks over a fence and across Highway 6.
Before those tanks reached Trinidad Benham Corporation,  they damaged coverings and outdoor furniture, as well as the cart return at the store located at the Highway 6/61 junction in Imperial. An employee’s car had some damage, but Bomgaars employees aren’t sure if that was from hail or the tanks.
One of the tanks got wedged between two silos at Trinidad.         “Another is way out in the field (by Trinidad),” Bomgaars employee Jerrah Ambrosek said.
West along the highway from Bomgaars, Harchelroad Motors had some exhaust fans break off the roof.
Imperial was the only town affected by power outages, lasting from 4:30-6:30 p.m. and again from 11-11:45 p.m.
Champion didn’t have outages, “but they could be either Southwest Public Power or Highline Electric,” Public Works Director Pat Davison said.
The problem in Imperial, Davison added, was a downed pole with Tri-State.
“They lost a pole between our substation and Enders,” he said.
With few crops out right now, there was not much damage at area farms.
“We did have one farmer report oat damage down in Champion,” said Dustin Weiss of Farm Bureau Financial Services. “But that was minimal.”
According to the National Weather Service in North Platte, wind gusts reached 46 mph on Sunday.
Janiel Kimble injured;
recovering in Denver
Janiel Kimble is recuperating at a Denver hospital after being severely injured when, at the height of the windstorm Sunday, a large glass block window crashed and broke on top of her in Enders.
She and husband Lance purchased the former school, which later served as a church, in Enders where they reside.
Lance said his wife was on the second floor watching the storm through the large 8 x 11-foot window, as he finished work on a vehicle downstairs. He planned to join her upstairs in a few minutes.
He heard a “big crack of lightning and thunder” and then a big crash upstairs. Seconds after, he said dust “just rained down on me” from the rafters above him. He believed lightning struck the building.
After rushing upstairs, he found his wife lying unconscious on the floor, and immediately called 911. Grabbing a towel from their living space, he applied pressure to her injuries until help arrived.
Kelsey and Kym Weiss were in the area storm-chasing, he said, and arrived to help, as did friend Marcie Kelley, who brought EMT supplies to the scene before Imperial EMS arrived. Lance said, after her arrival, Kelley immediately called in that a flight for life would be needed.
Janiel was taken to Chase County Community Hospital in Imperial for initial treatment, and then flown out to Denver.
Lance said she received 60 stitches from above her left eyebrow to below her left ear and about 40 staples to the back of her head.
She underwent surgery Monday when a plate was placed in her broken left arm, and a dislocated left elbow has also been set. Her left foot was fractured, as well.
Lance said, “It’s day by day. She was beat up pretty bad.”
He’s uncertain how long she’ll remain hospitalized, but she was still in ICU at Swedish Medical Center Wednesday morning.
Flowers cannot be sent to the ICU, but cards can be received. Her address is Swedish Medical Center, ICU, 501 East Hampden Ave., Englewood, Colorado 80113.