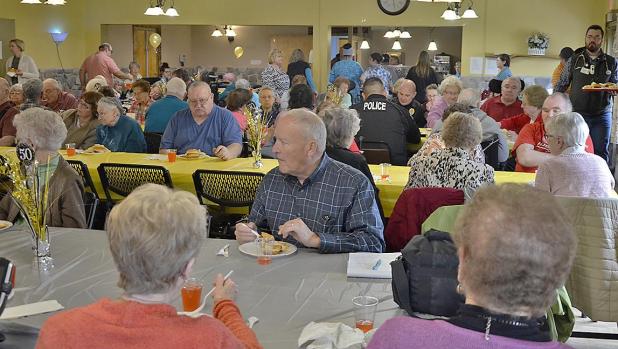 The photo shows attendees at the 50th anniversary celebration of Imperial Manor as the noon meal was served. (Johnson Publications photo) 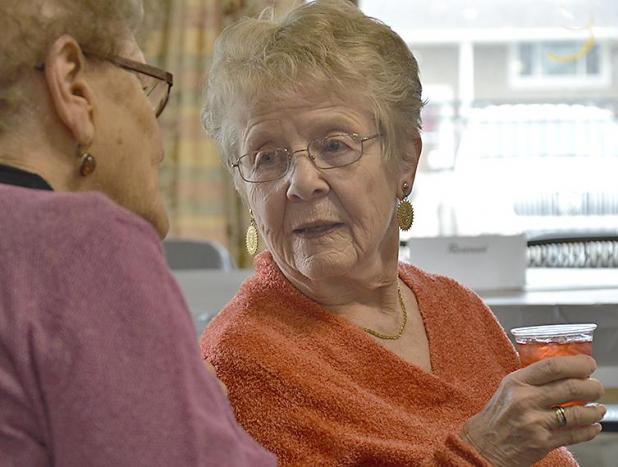 Elna Johnson of Imperial, left, visits with Margaret Elley of Lincoln at the 50th celebration. Elley was a nurse aide on staff at Imperial Manor 50 years ago when it first opened. Johnson’s husband, Loral, was an original board member for the nursing home when it opened and served on the board until his death in 2002. (Johnson Publications photo)

Last Friday, more than 100 people attended the 50th anniversary of Imperial Manor to commemorate its inception. Due to a spring snowstorm, a number of people cancelled their attendance, but it was still a good turnout.
To kick off the celebration, Marla Smith introduced what she called “The Good Friends Band,” for lack of a better name, she said. The members were Jim Brown on harmonica, Dan Schoenholz on drums and vocals, Dave Hogsett on base guitar and Smith on lead guitar and accordion.
The band performed a number of old-time songs while people were arriving and visiting with family and friends.
At 12 noon, the facility administrator, Eric Haider, gave a welcome speech and introduced some key employees and their positions, one of which was his wife, Margie, Director of Nursing.
“Our goal is to provide the best possible care for our residents,” Haider said.
He went on to say that Billie Hayes, Manager of Environmental Services and a 35-year employee, had put together a book about the history of the nursing home facility. The book was available for viewing in the lobby.
Haider invited people to share a few memories about the Manor while lunch was being served.
Resident Keith Jaeger shared some memories about his father, Sam, who had a mail route years ago and was the owner of what is now the Northside Motel.
An out-of-town visitor to the anniversary celebration was Margaret Elley of Lincoln.
Elley shared her memories by explaining that her last name was Deems when the Manor first opened its doors. Her husband was Richard Deems, pastor of the United Methodist Church in Imperial at the time.
They lived here from 1966 to 1972 and had four daughters in school.
Elley said she was on staff at the Imperial Manor as a nurse aide from the day it opened in April 1968 until they moved in 1972.
“One of the things that was so great in the beginning was the residents came in a few at a time. That way we got to know each one really well. They were like family,” she said.
She loved being able to spend time with them. It was fun, she added.
“Jean McNair was the head of nursing, and she trained the nurse aides,” said Elley.