Jan Schultz | Johnson Publications
Just after releasing purple and orange balloons, the motorcycles and vehicles took off for a day of riding, but more importantly, to raise funds for Harley Markee’s medical expenses. Leading the departing group was organizer Brad Dinnel and passenger Deb Blecha. 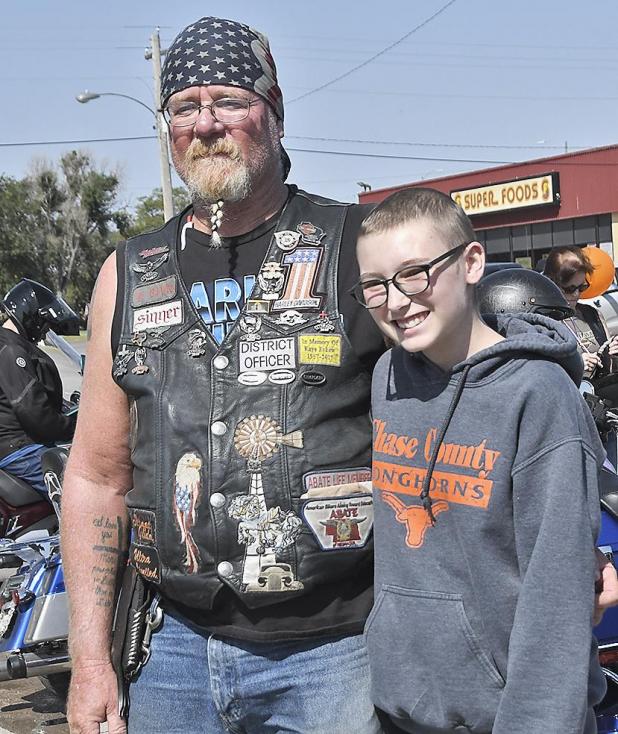 Jan Schultz | Johnson Publications
Harley Markee was on site Saturday morning for the poker run send-off that raised funds for her medical expenses. She is pictured with organizer Brad Dinnel.

On a hot, 100-degree Saturday over Labor Day weekend, people showed up to help out a seventh grader battling cancer.
Twenty motorcycles and two vehicles, taking along 29 participants, traveled 206 miles on a poker run route in a benefit for Harley Markee.
Organizer Brad Dinnel viewed it a success, as all proceeds went to offset Harley’s medical expenses.
“It’s what we do to help,” Dinnel said.
Bikes lined up along 12th Street as they registered inside at MorningStar Cafe. There, they received purple and orange balloons, which were released as they left Imperial for their first stop in Lewellen.
Before leaving, however, Harley gave a short talk to the group. She’s had eight months of hard chemo and radiation in her battle.
The poker run took place just a day before the one-year anniversary of her diagnosis of acute myeloid leukemia (AML) and acute lymphoblastic leukemia (ALL).
“We’re here for Harley,” Brad told the group.
A prayer was said before the entourage headed east on 12th Street for Highway 61.
After the group’s first stop at the Blind Goose in Lewellen, other stops included Toots in Chappell, Middle of Nowhere in Venango and in Grant, where DJ’s hosted them. Dinnel said DJ’s donated a number of prizes for a raffle there, generating more funds for the benefit.
Participants received their fifth and final card at the VFW in Imperial, where about 60 enjoyed dinner, Dinnel said.
The best poker hand, with a pair, was turned in by Zathen Melcher of Brady.
Randy Bartlett of Imperial was second, while Janet Sheaffer of Imperial was third.
All three received cash prizes.
Dinnel said he’s been friends for 30 years with Harley’s mom, Melissa, a fellow bus driver at Chase County Schools.
Harley attends classes at CCS as much as she can.
Harley is also dealing with avascular necrosis (AVN), the death of bone tissue due to a lack of blood supply.
“Harley’s treatment involved steroids. Steroid damage has caused her ankle bones to have holes in them,” her mother said.
Harley will eventually be undergoing stem cell therapy to repair the ankle bones.
Dinnel said it was a good trip, and was happy to organize the benefit. There were no incidents and no breakdowns.