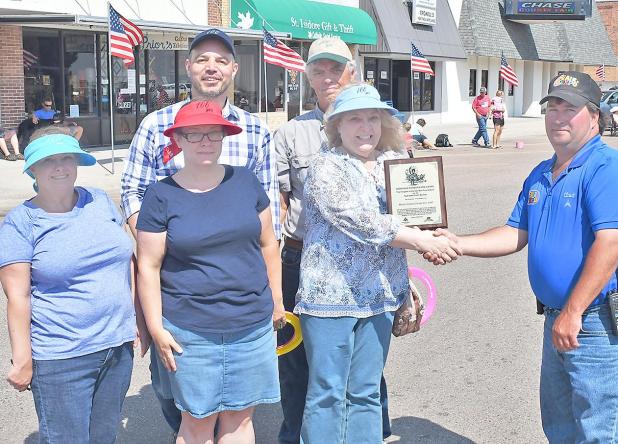 Five members of the Toft family were present at the Chase County Fair parade Saturday to accept this year’s  Nebraska Pioneer Farm Family Award.
Mike and Patricia (Patti) Toft of Sterling, Colorado, their son Greg from Durham, North Carolina, and nieces Darby and Daisy Toft from La Crosse, Wisconsin traveled to Chase County to be honored with this award.
The farmland is located in the northwest corner of Chase County.
“Half the farm is called Prairie View Farms, Inc. The other half is Patricia Toft’s as an individual,” said Mike Toft.
Where it began
Prior to 1917, 23-year-old Ward Mort left Beatrice to start a farm in the western part of Nebraska.
Finding good ground south of Venango, he began farming.
By 1917, he had purchased a quarter of ground, built a house with his brother-in-law, and moved his wife, Freda, and young sons Lester and Frank to northwest Chase County.
Mort expanded the farm throughout his life, as did his sons and eventually his grand-daughter, Patricia, as they assumed operation of the farm.
After WWII, Lester Mort and his wife, Dorothy, returned to run the farm.

To read more on the Toft family's Pioneer Farm Award and other stories, please log in or subscribe to the digital edition. https://etypeservices.com/Imperial%20RepublicanID359/