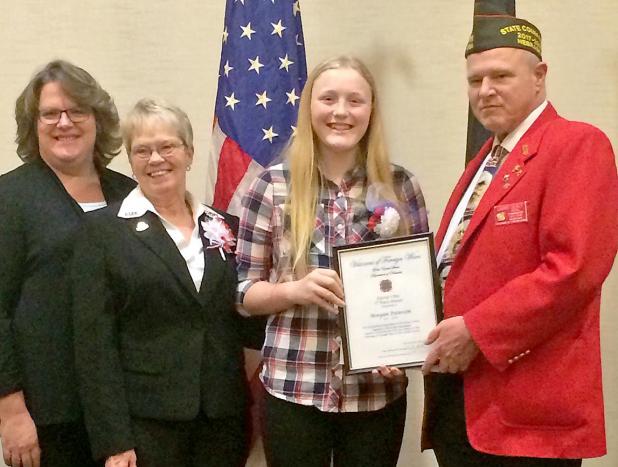 Morgan Peterson won first place at the state level in Lincoln for her Patriot’s Pen essay, “America’s Gift to my Generation.” Her essay is currently being judged at nationals in Washington D.C., and she waits to find out where she places in this final level of competition. Pictured, from left, are Kim Abboud, State Chairperson Scholarship Committee; Carol Brosnihan, Department President VFW Auxiliary; Peterson and Larry Gerlt, VFW State Commander. (Courtesy photo) 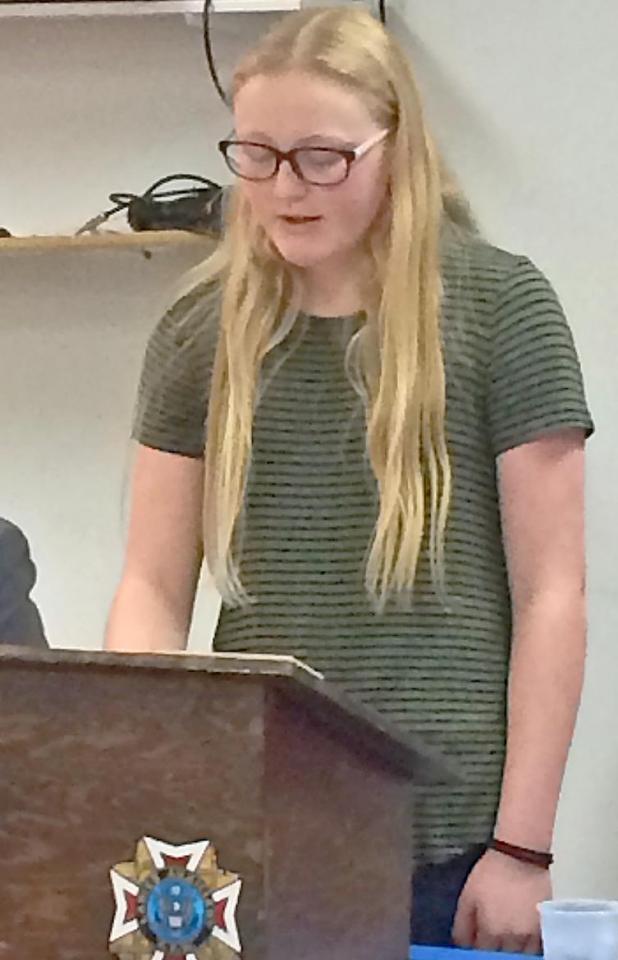 Morgan Peterson of Imperial has placed first at the state level in Nebraska for her Patriot’s Pen essay “America’s Gift to my Generation.”
The eighth grader’s essay is now being judged in Washington D.C. at the national level. Her essay is one of 54 submissions (50 states and four territories) which placed first for the Patriot’s Pen essay competition.
If Peterson wins first place at the national level, she will receive $5,000 and an all-expense paid trip to Washington D.C. March 3 - 7.
Crystal Peterson, Morgan’s mom, said they are expecting to be notified very soon if she is the winner.
Peterson’s journey began when her essay was one of 70 submitted in the local VFW Post 4688 contest, said Sue Moore, Auxiliary President.
The Patriot’s Pen essay contestants are from grades 6-8 and are sponsored by the local post auxiliary, said Moore.
Statewide, there were 2,854 Patriot’s Pen essays submitted, she added.
It was announced that Peterson won first at the local level during the VFW Post 4688 pre-Thanksgiving dinner on Nov. 12, 2017. That win garnered her $75.
She was then eligible to go to the district level competition as one of three finalists in her category. Her essay was judged at the North Platte VFW Post on Jan. 21, Moore said.
Moore said it was announced that Peterson had been selected as the first place winner at the district level and would be moving up to the state level in Lincoln. Her winnings at district were $150.
Last weekend, Peterson’s essay was judged, along with the other nine districts’ first place winners in Nebraska.
She placed in the top three and was sitting on the stage in Lincoln with the other two top winners for the Patriot’s Pen essay, she said.
“I was very nervous while up on stage. When they announced the third place winner, I was excited that I had a chance to win,” Peterson said.
“When they announced the second place winner, I looked at my mom and smiled because I knew I had won,” Peterson said.
She said it was a nerve-racking process, but she was very excited and happy when she won.
Peterson received a cash prize of $1,000 and a framed certificate for her win at state.
Peterson said she is grateful to the VFW and auxiliary for all they have done for her.
She and her essay are representing the state of Nebraska at the nationals in Washington D.C., and she is very proud to have been selected, she said.
Peterson and her mom are now anxiously awaiting the results at nationals, hoping for a trip to Washington D.C.