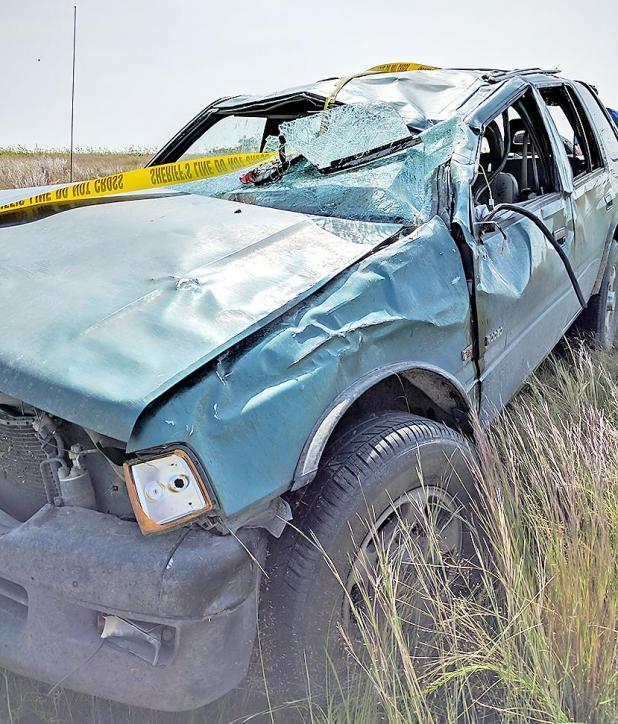 This 1996 Isuzu Rodeo was a total loss after a rollover accident Sunday night west of Champion. A family of three sustained injuries, with the driver Rhonda McDaniel suffering the most serious ones. She had to be flown out to a Kearney hospital. (Photo courtesy of Chase Co. Sheriff’s Office)

A rural Haigler family sustained injuries in an early Sunday evening rollover west of Champion that sent the driver to a Kearney hospital.
Chase County Deputy Duncan Einspahr said Rhonda McDaniel, 48, was driving the 1996 Isuzu Rodeo SUV westbound on Road 734, about 100 yards from the 322 Avenue intersection, when the vehicle dropped off the right shoulder.
Passengers in the vehicle were McDaniel’s husband, Arthur, 48, and son Cody, 22.
Once the vehicle left the road, the driver over-corrected, causing the SUV to do a 180 and slide across the road, entering the south ditch sideways, where it rolled three and a half times.
The rollover ejected McDaniel through the front windshield before the SUV came to rest on the driver’s side. The two passengers remained in the vehicle, Einspahr said.
Due to damage to their cell phones, Arthur McDaniel was only able to call the last number on his phone, his employer Bob Milner, who lives nearby.
Einspahr said Milner arrived at the scene, then called 911 about 7:25 p.m.
The family was transported by three Imperial EMS ambulances to Chase County Community Hospital. Mrs. McDaniel, who sustained several broken bones, was later flown out to Kearney, the deputy said.
Arthur and Cody McDaniel were treated and released with minor injuries, Einspahr added.
The SUV, which was removed from the scene Monday, was a total loss, Einspahr said.
At this time, the investigation is ongoing to determine if anything else contributed to the accident, he said.
Sgt. Justin Mueller also assisted at the scene, along with the Imperial Volunteer Fire Department.