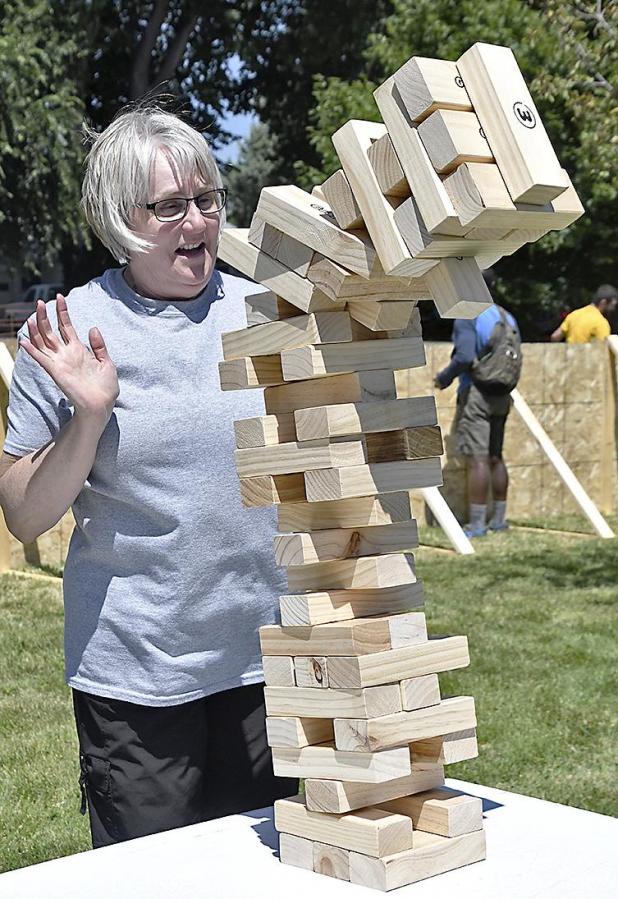 A large Jenga game was set up to entertain people during Smokin’ on Broadway. Brenda Ledall had some success removing pieces earlier until she pulled the wrong one in a little contest with her daughter. (Johnson Publications photo) 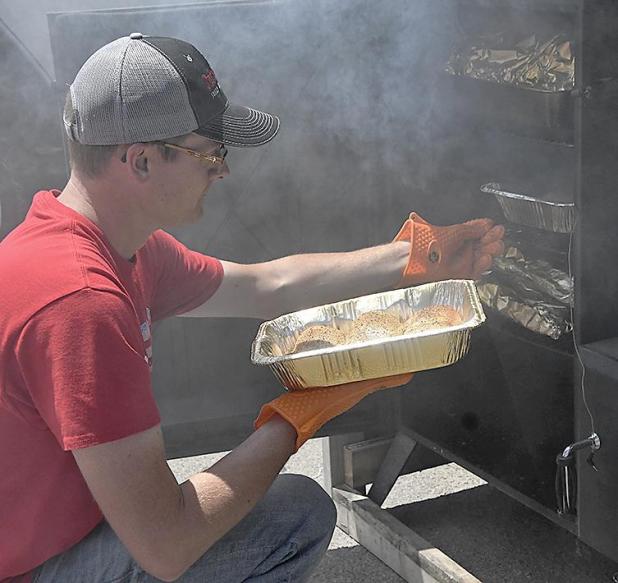 Chance Thayer teamed up with his father-in-law to compete again in this year’s BBQ competition. Here, he checks his entry in the chicken division. (Johnson Publications photo)

New events including an Iron Skillet cooking contest, life-sized games and live afternoon music made Saturday’s second annual Smokin’ on Broadway another hit.
More than 1,500 people attended events throughout the day, all planned by the Smokin’ on Broadway committee, the Chamber and sponsors to complement the barbecue competition and Hear Nebraska concert that headlined it all last year.
What appears to be an annual event in the plans from now on, the Chamber’s Smokin’ on Broadway committee was pleased with this year’s edition.
“It was a great event with a mix of talents. Ordinary people came together to enjoy life and their freedom,” said Jana Pribbeno of the Smokin’ committee.
She said the committee hopes to keep future Smokin’ of Broadways in the month of July. They want to coordinate an annual July date with the Hear Nebraska’s tour, she said.
One of the new additions this year was the Iron Skillet competition.
Seventeen entries competed in dessert and appetizer divisions patterned after the popular “Iron Chef” cable TV show. Chefs received three ingredients for each division, which had to be used in the creation of their entries.
Eighteen elementary and middle school youths competed in the new paint-in competition, held in the newly air-conditioned city gym.
For the sports-minded folk, the committee added a .05K race ahead of the evening Hear Nebraska concert. Coordinators for the 164-foot race encouraged participants to run the .05K in costume, and the event drew 39 runners whose proceeds were earmarked for the Imperial Community Foundation Fund.
Life-sized Scrabble and Jenga games, as well as a human foosball area, added laughs and fun to the day’s events.
Taking it a step up from last year, the Smokin’ committee brought in a live band for afternoon music ahead of the evening concert. Job, Peter and Chuck from North Platte entertained in the afternoon with music from the 60s and 70s.
Also adding new fun for the younger set was a series of bouncy houses set up on the east side of the city office lot.
Several booths provided food throughout the day, and many enjoyed the BBQ and Iron Skillet samples, as well.
The committee also put up a large canopy this year with picnic table seating to provide shade during the 90-degree day.
BBQ contest, Hear Nebraska
Eight competitors in the barbecue competition returned for this year’s competition.
They competed in divisions for pork ribs, chicken, pulled pork and brisket this year, as well as a new division for baked beans.
BBQ Coordinator Jack Schnieder said numbers dropped some from last year due to wheat harvest and the approaching July 4 holiday. He hopes, too, the committee can coordinate a standard date/weekend for Smokin’ on Broadway in the future so BBQ competitors can plan for it.
Last year, Smokin’ on Broadway was held Aug. 6 to hit the same day as the Hear Nebraska concert.
Andy Norman, an Imperial native and Hear Nebraska executive director, said Imperial has set the standard on its tour schedule for community support and events surrounding the concerts.
A large crowd filled the grassy area along Broadway for the Hear Nebraska concert which featured Imperial’s own Talbott Brothers, along with Rothsteen of Omaha and Universe Contest of Lincoln.