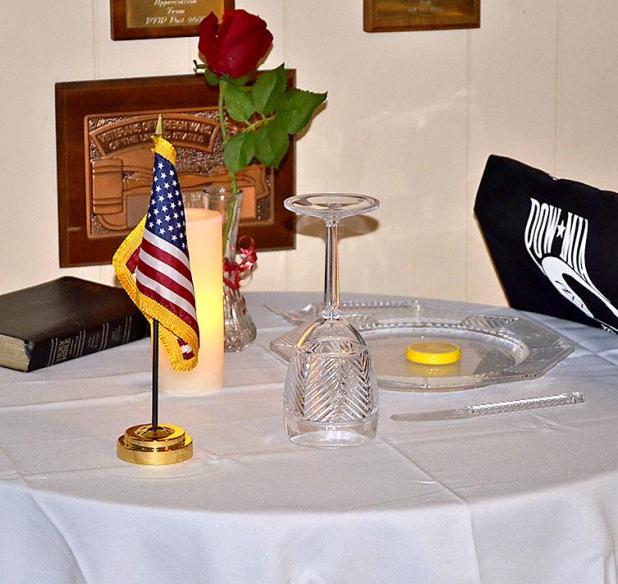 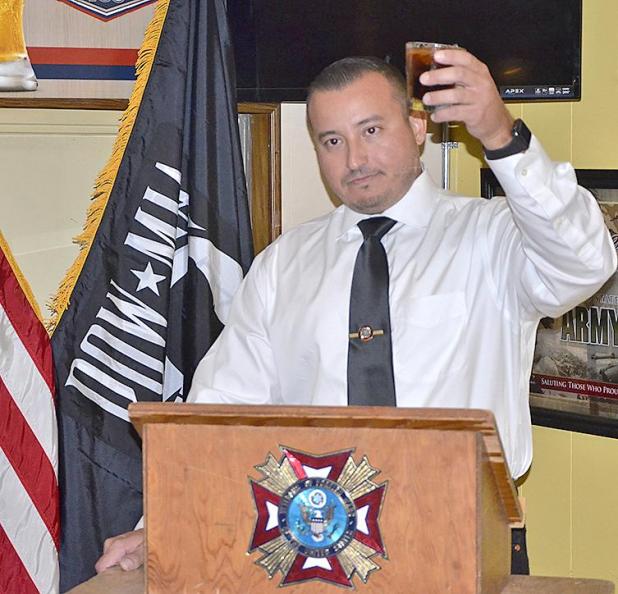 Last Friday, National POW/MIA Recognition Day commemorated approximately 83,000 American service personnel still unaccounted for in foreign countries or out to sea, according to the Defense Department’s Prisoner of War Missing Personnel Office, known as DPMO, and the Joint Defense POW/MIA Accounting Agency (DPAA). Statistics say 73,500 of them fought in World War II and 9,645 in the wars since.
Eric Gonzalez, a retired U.S. Marine, performed the POW/MIA Remembrance Ceremony at the VFW Post 4688 canteen. He said that as a veteran, he still wants to do his part. That is why he felt it was important to perform this ceremony.
He read the ceremonial script for the “Missing Man Table” explaining what each item on the table symbolized.         Gonzalez told the attendees that the small table was set for one, symbolizing the frailty of one isolated prisoner. The tablecloth was white for purity and the soldier’s intention to respond to their country’s call to arms.
He went on to explain the  other items on the table, which included a single red rose, a red ribbon, a slice of lemon on a bread plate, salt sprinkled on the bread plate, an inverted glass, the Bible, a lit candle and an empty chair representing the missing and fallen that weren’t present.
It is a very solemn ceremony  honoring the thousands who fought for their country and have not yet been brought home, said Gonzalez.
“I want to honor veterans before me and their sacrifices. I feel that the POW/MIA concept pertains more to the Vietnam soldiers,” Gonzalez said.
He went on to say that he couldn’t fathom the style of warfare they endured compared to today.
“My experience as a marine has always felt less difficult than those who served in Vietnam,” he said. “Today, we have such better technology.”