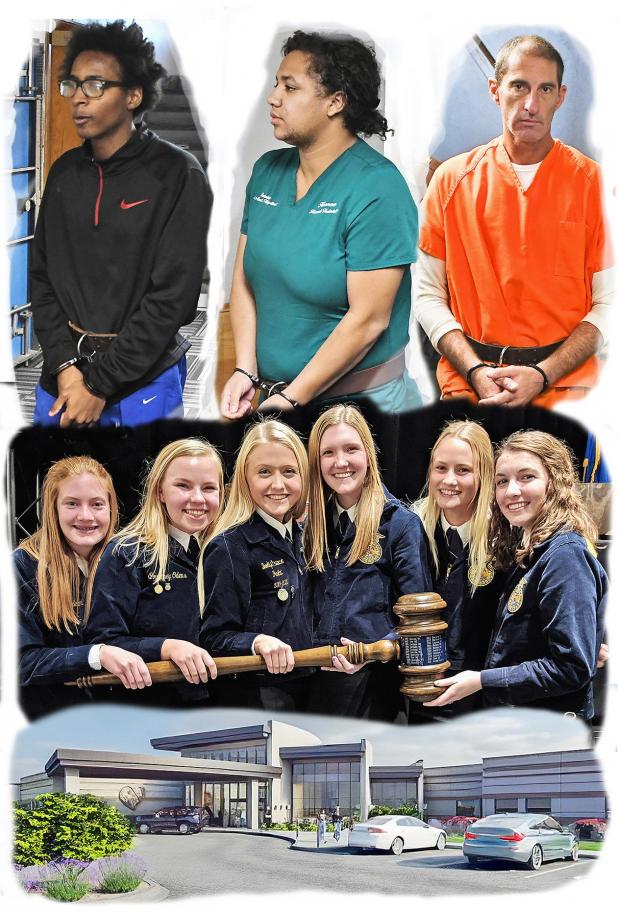 The collage above represents the top three stories of 2019 chosen by the Imperial Republican staff. (Johnson Publications graphic)

Chase County’s first murder cases in 40 years were ranked the No. 1 story by Imperial Republican staff members.
In their annual voting of events covered by the Republican’s news staff in the past year, eight employees ranked their top stories from 1-12. The rankings were tabulated for the overall list.
Six of the eight newspaper employees picked as their No. 1 story the first-degree murder cases now underway after the death of Annika Swanson, 22, of Imperial, whose body was found in a pasture south of Imperial on Nov. 24.
Imperial native Kevin Scot German of Colorado Springs, Colorado and Keonna Nilsa Carter of Taylorsville, Utah are jailed in North Platte without bail on first-degree murder and kidnapping charges. Russell Mann of Enders is in the Chase County Jail on accessory to kidnapping charges related to the case.
Here is a recap of the staff’s other top stories from 2019:
#2 National FFA title
The FFA senior parli pro team of Lindsey Mendenhall, Courtney Odens, Brooklyn Christensen, Alexis Richmond, Jozie Schilke and Valerie Herbert took the state title in spring 2019, which advanced them to the national competition last fall, where they earned the national championship. They set records both locally and statewide since their national parli pro title was also a first for Nebraska. In  addition, team member Schilke earned individual recognition as the Most Outstanding Member. The team was coached by Jeremy Vlasin.
#3 Hospital bond
In May, the hospital bond of $20.5 million was defeated in the first county-wide vote by mail. The margin of defeat was 984 against and 704 for. Funds would have been used to build a new hospital on the north side of the current clinic building and specialty clinic area. Earlier in the year, the hospital board had secured approval from the county commissioners to proceed with the bond issue.
#4 Cattlemen’s Ball
An estimated 3,000 people gathered at the Wayne and Chris Krausnick ranch between Wauneta and Enders June 7-8 for the Cattlemen’s Ball, a yearly event celebrating healthy beef in the diet and the cancer research being done at UNMC. It took a host of local volunteers to put the two-day event together that included various competitions, an art and history tent, meals and more, capped off with a concert by country star Clay Walker. The event raised over $748,500. Of that total, $74,859.88 came back to 13 southwest Nebraska groups.
#5 Sept. 11 hailstorm
A Sept. 11 hailstorm with winds clocked at 70 m.p.h. left a string of damage in its path through Imperial and rural areas. Golf ball sized hail was reported, and one insurance adjuster believed every roof in Imperial suffered some degree of damage; many vehicles left outside were damaged, along with trees. It contributed to a weary year for farmers, with weather-delayed harvests.