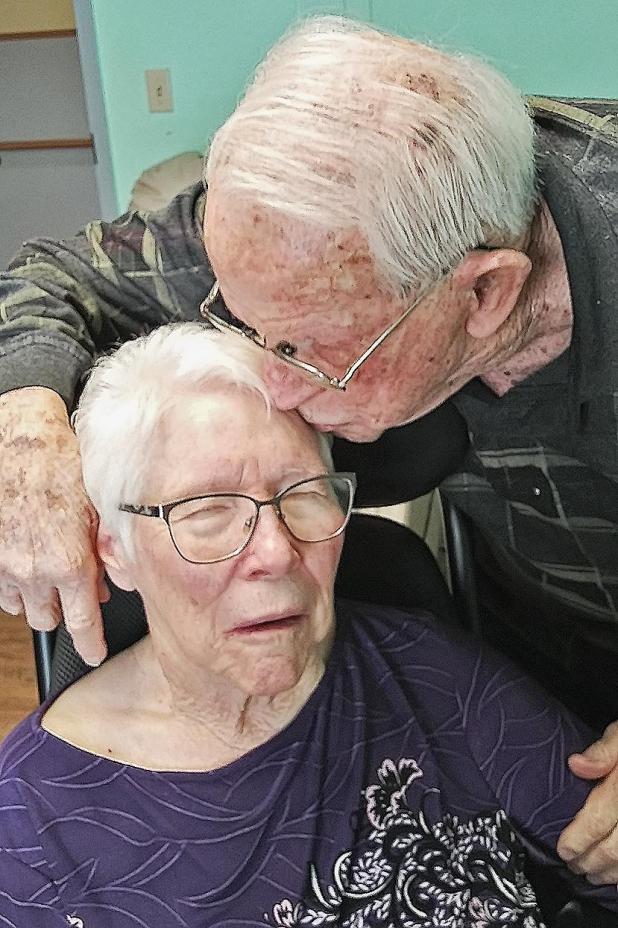 Courtesy photo
Jack Wilson gives his wife Ina a kiss. The couple has been married 71 years, something to celebrate as Valentine’s Day nears.

Many a Valentine’s Day celebrated over 71 years

Ina and Jack Wilson have been together since high school in Benkelman, and they are still going strong after 71 years of marriage.
Jack said he and Ina were high school sweethearts and have been together ever since.
The Wilsons now live at the Imperial Manor but are as close as ever, said Deb Hrcka, manor activities director.
The two have had an interesting history together.
Beginning at the age of 13, Ina lived at the hospital in Benkelman and worked for room and board.
Jack graduated high school in 1948 and Ina in 1949.
The couple married on Sept. 15, 1949 at the Lutheran Church in Benkelman.
They remained in Benkelman for a time where Jack helped his dad on the farm, he said.
In 1951, Jack went to work for the Department of Roads for the State of Nebraska, and the couple moved to Grant where Jack began his career working with a shovel, he said.
While there, Ina became an LPN and worked at the hospital in Grant.
They later moved to Elwood where Jack continued working for the road department, and Ina again worked as an LPN at the nursing home, eventually becoming the first Director of Nursing for the facility.
Imperial becomes home
In 1977, the Wilsons moved to Imperial where Jack continued his career with the road department, and Ina worked at Chase County Community Hospital for a number of years in medical records.
“When we first arrived in Imperial, we didn’t know anyone. We had gone for a walk one day and passed a house where Stan and Vicki Smith were painting. We offered to help, and we became best friends,” Jack said.
The couple was very active in the community over the years.
Both Jack and Ina volunteered for the Lions Club and at the Imperial Community Center.
Jack served on the community center board for 20 years, he said.
The Wilsons both retired in 1994 when Jack had worked his way up from a shovel to superintendant of roads, he said.
They continued serving the community and their church.
The couple raised three children and now have seven grandchildren and 14 great-grandchildren.
Their eldest son mentioned that his parents were always lovebirds, and he never once heard them argue.
“It takes love, devotion and determination for a long, happy marriage,” Jack said.
“It also consists of three people—a man, a woman and God.”
Jack added one more loving thought towards his wife as Valentine’s Day arrives this weekend, “I love her, and she loves me, and that’s the way it will always be.”