Becky Kuntzelman | Johnson Publications
Imperial Manor residents enjoyed some much needed time outside in the fresh air last Thursday. There was a fish tank stocked with bluegill for fishing and a BBQ with all the fixin’s. 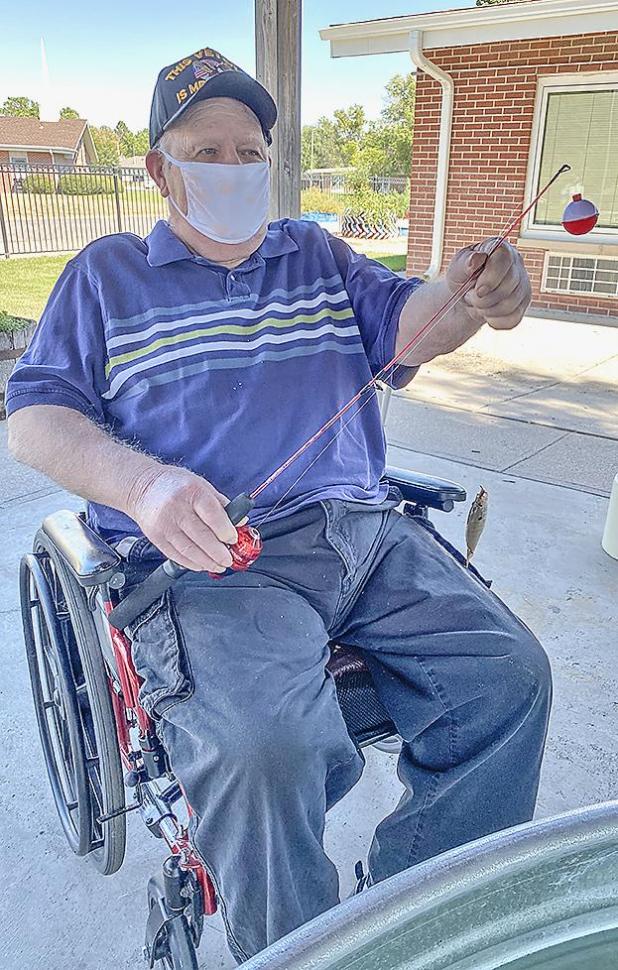 Courtesy Photo
Resident Lester Harmon no doubt will be telling a good fish story about the one he caught. 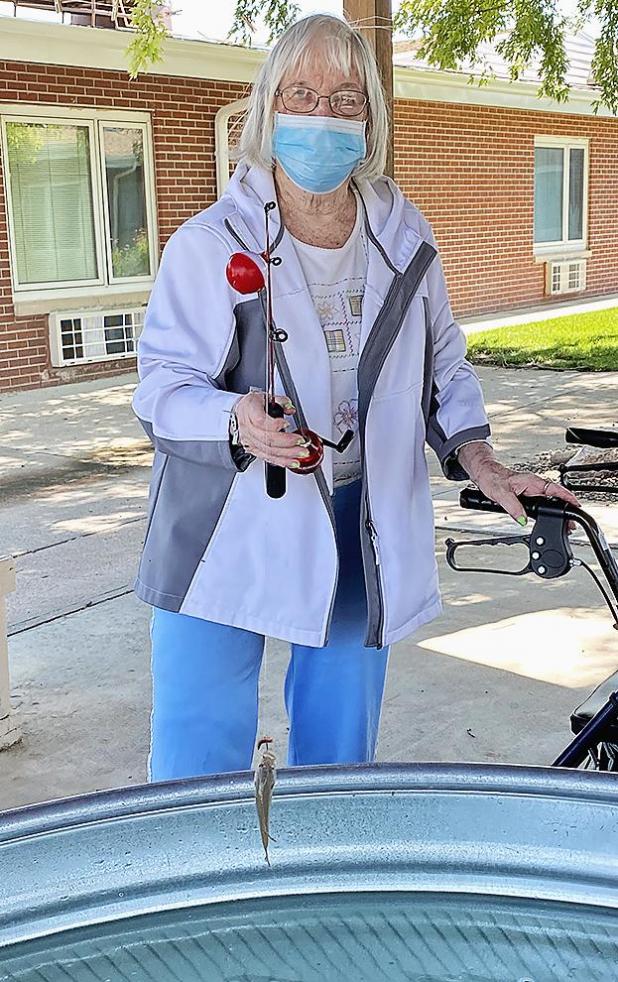 Courtesy Photo
Jan Huser was just one of several residents who had fun fishing for bluegill.

Imperial Manor residents have had a long haul being cooped up inside due to safety mandates during the pandemic.
“We wanted to get residents outside for some much-needed fresh air and sunshine and have some fun doing it,” said Billie Baros, activities director.
Last week, staff arranged a variety of outdoor activities Monday through Friday.
The list included a pie social, s’mores over the fire pit, root beer floats and a “wet T-shirt” contest, Baros said.
“The wet T-shirt contest consisted of T-shirts hung from a line with clothes pins, and residents squirted them with squirt guns filled with water and dye—just in case you were wondering,” she said.
Gone fishin’
Last Thursday was a special day called “Fishin’ in the Backyard,” Baros said.
The temperature was pleasant with plenty of sunshine, and the residents seemed to enjoy the chance to spend time  outside.
The fenced in courtyard by the manor was decorated with colorful balloons, and a number of residents were positioned with their own individual table at six feet apart.
Each resident and all staff wore the required face masks.
“We had a BBQ feed of hotdogs, hamburgers, potato salad, cowboy beans, mixed fresh fruit and sodas,” said Baros.
While remaining spaced, the residents circled a stock tank donated by Bomgaars, stocked with bluegill fish donated by the Wauneta Boy Scouts and the Pleasant Valley Fish Farm in McCook, she said.
“As fish were caught, we threw them back into the tank. We removed the barbs from the fish hooks so as not to hurt the fish,” Baros said.
Frenchman Valley Coop and T-Junction donated firewood for the fire pit for residents to make their s’mores, she said.
The “Fishin’ in the Backyard” event was a combined effort, said Baros.
“Peggy Goings, LPN, was the idea person behind it all,” she said. “She was also in charge of getting the fish tank and fish.”
Baros coordinated the day’s activities with the help of  her activity assistant Brooke Baney and CNA Alex Pflum.
“I wouldn’t have been able  to get this all done without them,” Baros said.
Throughout last Thursday’s event, Baros had country music playing.
Several residents could be seen tapping their feet and hands or nodding their heads in time to the music.