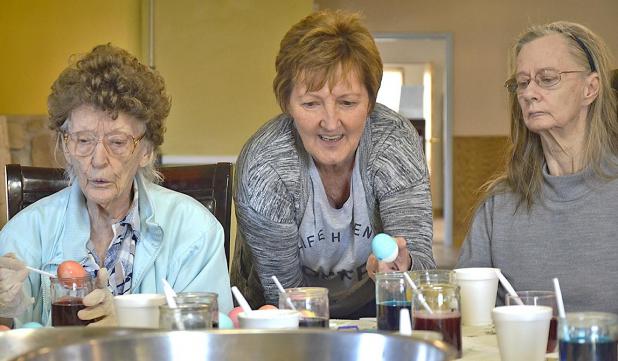 These three ladies are concentrating on how their Easter eggs are coming along in the dying process. Pictured from left are resident Cap Kelley, volunteer Monica Johnsen and resident Deb Garrido. (Johnson Publications photo)

The Imperial Manor nursing home evolved from an idea to a reality at a formal dedication on April 7, 1968.
This Friday, the community is invited to celebrate the 50th anniversary of the facility from 11 a.m. to 1 p.m.
Entertainment will be provided beginning at 11 a.m., and lunch will be served at 12 noon.
Anyone planning to attend is asked to RSVP by calling 308-882-5333.
Jo Leyland, city clerk and administrator, said having the facility in Imperial has been a great advantage for people to keep family members close.
She added that elderly family members also can have a feeling of security by being able to stay in their own community.
“When the Manor was built it benefited the community by providing employment opportunities. It was also advantageous having a full-care facility in the same community with a hospital and medical clinic,” Leyland said.
Elna Johnson, widow of one of the original Manor board members, Loral Johnson, recalled that the first board was appointed by the city council to make decisions on the planning and implementation of the new facility.
Johnson said her husband strongly believed that this facility was a necessity for the community.
“Opinions from the community had voiced a need for the Manor to be built, and people were anxious to see it make a go,” she said.
Johnson recounted some fun memories where her Methodist women’s group presented a program at the Manor when they dressed up in nursery rhyme costumes and recited well-known nursery rhymes to the delight of the residents.
“I remember one lady who was mostly incoherent, but she perfectly recited every nursery rhyme with us,” said Johnson.
The residents liked being remembered and recognized by the community, she added.
“Different church and school groups would go over to the manor to give programs or just visit and interact with the people, just like they still do today,” she said.
It was a great time to mix with community members who reached out to the residents and created a connection with them, Johnson said.
“My husband served on the board until his death in 2002,” she said.
More tales recounted of Manor’s early days
Phyllis Langin of Imperial will be 95 years young on May 3, and she had much to say about the first days, weeks and months after the Manor opened.