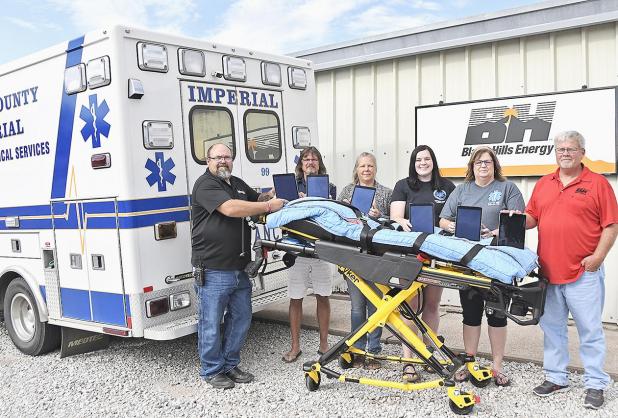 Black Hills Energy crews traveled to 15 communities across Nebraska last week on “Improving Life Day” to donate 200 iPhones and iPads to non-profits whose mission includes helping others and giving back to the communities they serve.
Imperial was one of those communities and Imperial EMS was the recipient here.
Last Friday, Black Hills personnel presented six refurbished iPads to EMS officers who gathered in front of the Imperial Black Hills Energy office building.
EMS President Deb Hayes said the donation will provide two iPads in each of Imperial’s three ambulances, one in front and one in the back for the EMTs.
Among other things, they will allow the EMTs in the back to get started on paperwork right away, as well as help personnel in the front locate addresses, Hayes said.
Black Hills personnel said they wanted to do something for those who serve their communities.
“This event demonstrates our mission of ‘Improving Life With Energy’ by taking time to give back to the communities we serve,” said Jeff Sylvester, vice president of Black Hills Energy’s Nebraska natural gas operations.
“We thought this would be a nice way for our crews to reach out and engage with the communities we serve and our employees and their families live, work and play,” he said.
Other Nebraska communities receiving donations were Alliance, Chadron, Gordon, Hay Springs, Rushville, Scottsbluff, Ogallala, Ansley, Lexington, Ord, Albion, Columbus, Norfolk, and six locations in Lincoln.
Black Hills Energy provides energy to nearly 300,000 customers in Nebraska.