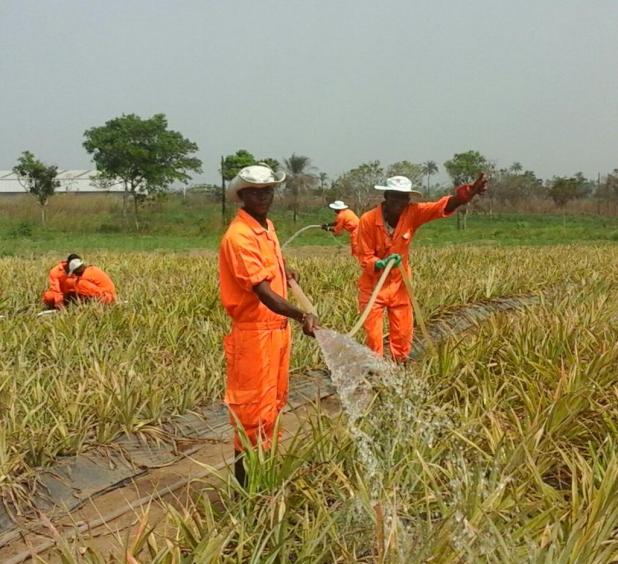 There were usually 45-50 workers that would work on the farm on a daily basis. What shipments did or did not come in determined who would show up.  (Courtesy photo) 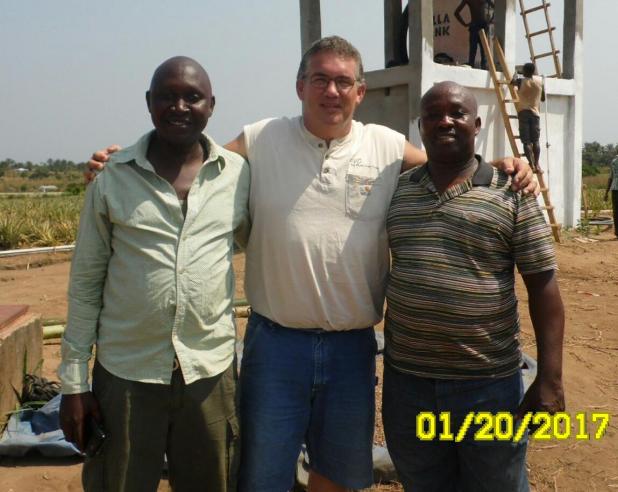 One of the main goals for the Holmans’ trip was to install a drip line irrigation system. A water tower, the main water source, is located on the farm. Pictured with Nate, at left, is one of the World Hope International ag workers Bimba and Holman’s driver William Conteh. (Courtesy photo)

By Christi Christner The Imperial Republican

Nate and Cynthia Holman were busy this winter.
Instead of experiencing the snow and blistery winds found in Nebraska’s colder months, they were in Sierra Leone, Africa being a part of a vision that not only changed their lives, but impacted an entire village’s livelihood.
Through World Hope International, a Christian relief and development organization, the Holmans’ mission for their trip was one thing­—spread hope through planting pineapples.
Sierra Leone currently has some of the highest poverty rates in the world—70 percent of the country’s population lives in poverty.
“Their hospitality will just about break your heart,” said Nate. “They are a very grateful people.”
Because of the devastating war that lasted 11 years, Sierra Leone’s infrastructure is nearly non-existent.
The Ebola epidemic that took 11,315 people’s lives, 3,955 of which were from Sierra Leone, has also set back the country.
With the destruction and poverty that has overrun Sierra Leone, there is much work to be done in rebuilding the country.
The Holmans were gone for 60 days. They left in December 2016 and returned Feb. 1. This was the third visit for Nate, but Cynthia’s first.
Nate had visited two separate times prior to the recent one to scope out the land and help prep for planting.
“I chose to go on the longest trip,” Cynthia said.
World Hope International works throughout not just Africa, but three other countries to combat human trafficking, extreme poverty, disease outbreaks, as well as food and water insecurity through various programs that address economic development, education, nutrition, health, clean water and sanitation and agriculture.
With the help of agriculture workers, from World Hope International, that already call Sierra Leone their home and people within the village where the farm is located, a total of 1,480,000 pineapples were planted. There were just two loads left to be planted when the Holmans came home.
“The survival rate for pineapples is 98 percent. They are very hardy and have value in the pulp and juice. They don’t strip the nutrients from the land,” said Nate.
The goal for actual planted land went from five acres up to 20 acres and then back down to five.
“Everything is done through funding. We did get 20 acres cleared, but 5.7 were planted,” said Nate.
The villagers that were trained to plant, care and harvest the pineapples also cleared all 20 acres.
“We had one tractor for not even a week,” said Nate.