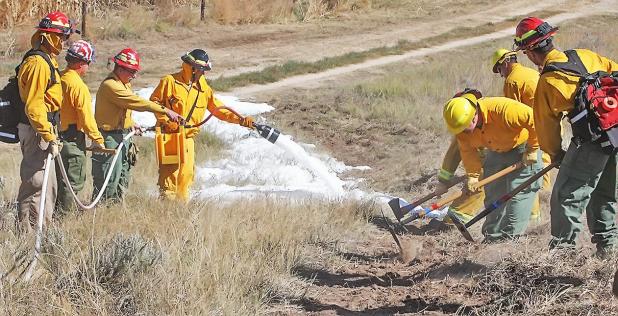 Carolyn Lee | Johnson Publications
Firefighters on the left are laying down a line of foam while those on the right are chopping out a fire line Sunday on property located south of Imperial.

The reality of multiple wildfires burning across the Western United States has been brought home to Imperial area residents the past few weeks, with a strong smoke smell and hazy skies at times.
A Wyoming fire reportedly produced the acrid smoke odor Monday, just a day after a number of fire department volunteers gathered in Imperial for training in the fighting of wildfires.
Completion of the “Red Card” training, which spans two weekends, certifies a participant to fight federal fires on federal land.
About 15 volunteer firefighters from Grant, Benkelman, Hayes Center, Keystone-Lemoyne and Imperial Fire Departments are taking the 32-hour class.
It is being led by Ralph Moul of the Keystone-Lemoyne Fire Department, who is also with the State Fire Marshall’s training division.
Kelsey Weiss, who is Red Card certified, said a class has been planned for Southwest Nebraska for some time, but had been postponed due to the coronavirus outbreak.
Last weekend participants spent some time in the classroom learning about fire safety, what to look for on a fire line and fire activities.
They also took their training outdoors, building a fire line by hand and then laying down a foam boundary along the line in case the fire jumps the fire line.
That fire line will hopefully stop a fire from spreading. The foam can be re-wetted to keep it working longer.
Blacklining, or deliberately burning an area from the foam line, allows firefighters to set up their equipment on the burned site, as it won’t ignite again.
Hose “lays” were also demonstrated. Some cover more area by having secondary hoses branch off from the main hoses.
The volunteers also trained for a pack test they have to pass before obtaining their Red Cards. They have to complete a three-mile run in 45 minutes carrying a 45-pound pack on their back.
Weiss said next weekend the group will train for an “incident inside an incident” at Enders Reservoir. That’s when someone fighting a fire gets injured, he explained.
“We had hoped to get live fire practice in,” he said, but the Nebraska Game and Parks denied the request, citing dry conditions.
Once the training is completed, the firefighters apply to the Nebraska Forest Service for their Red Cards.
When wildfires such as the ones burning in California, Colorado and Wyoming develop, the firefighters apply to fight those fires, with the Forest Service then assigning them to engine, hand or hot-shot crews, Weiss said. He himself is on an engine crew.
There are six Imperial firefighters certified as Red Card volunteers, Weiss said, with five more taking the training.