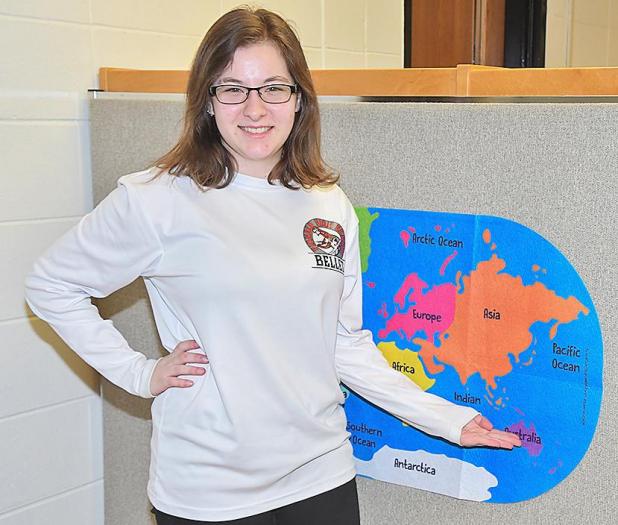 Halle Fiedler, a CCS junior, points to Indonesia on this map, where she will head to later this year as part of the Rotary youth exchange program. (Johnson Publications photo)

It’s been her dream as long as she can remember.
Halle Fiedler, a junior at Chase County Schools and daughter of Scott and Jill Fiedler of Imperial, will travel to Indonesia later this year as part of the Rotary Youth Exchange program.
“Ever since I was little I’ve always loved traveling,” Fielder said. “As I grew older, I loved it more and I love to see new places.”
The idea of being a foreign exchange student came to Fiedler as a seventh grader.
“I thought, ‘Wow, that’s so cool and different,’” she said. “Nobody would do that, especially here.”
The Imperial Rotary Club hasn’t had a student in the youth exchange program for about 10 years.
“We feel so fortunate that someone of Halle’s caliber will represent not only our country but our local school and community,” said Angie Swanson, Imperial Rotary’s Youth Exchange Chairman.
According to the Rotary website, “Students learn a new language, discover another culture and truly become global citizens.”
“I’ve always loved to try new things and be that unique, different person like that stood out from everybody else,” Fiedler said.
Her parents weren’t always on board with her idea of living abroad.
“It’s always been on and off with me and my parents,” she said. “They hated the idea.”
Interview process
After she submitted her application last year, Fiedler had a local interview in October.
As the sole applicant for the Imperial chapter, “it wasn’t really a strict or scary interview,” she said. “It was basically questions like, ‘are your parents okay with this and are you okay with this?’”
Fielder then moved on to the district interview process in November, held in North Platte.
It was more than just an interview.
The morning of Nov. 15 was geared toward educating the students and their parents about the program, including how parents could transfer money to their children while abroad.
“There were panels with host parents or past host parents who explained what life is like sending your child or taking in a child,” Fielder said.
The afternoon was for interviews. The interview process was split into two groups.
“I went to the first one and then I had an hour break,” Fielder said.
After her break, she gave a speech, followed by the second interview.
“The questions were hard,” she said. “They want you to be really honest, though.”
In the hour-long interview, Fiedler was interviewed in the first 30 minutes, followed by her parents.
“I was nervous my dad would say something dumb,” Fielder laughed. “I wasn’t worried about my mom.”