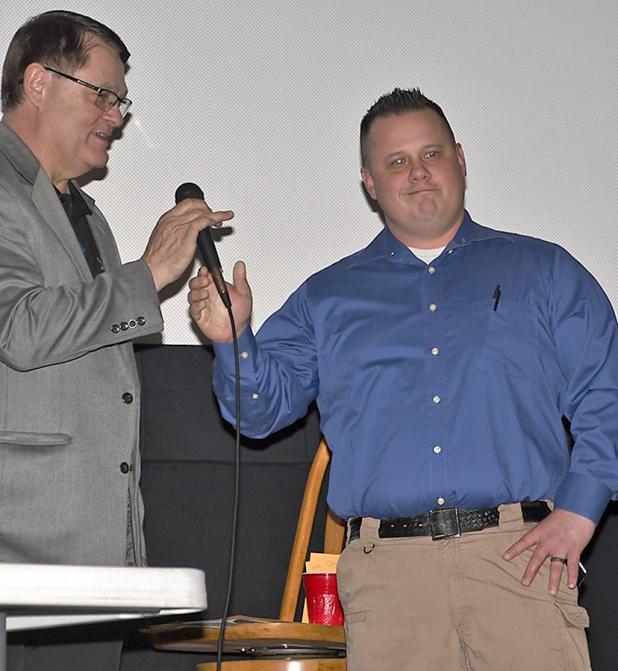 Duncan Einspahr, a Dist. 2 commissioner candidate on the Libertarian ticket, was given time to address the crowd. (Johnson Publications photo)

Candidates for two Chase County commissioner seats up for election this year answered audience-generated questions in the second half of a town hall forum Monday night.
Questions addressed opinions on top issues, property values, infrastructure, adding roads/maintenance equipment and whether county vehicles should be tracked by GPS.
All seven candidates for the Dist. 2 and Dist. 3 seats were present for the event, scheduled ahead of the May 15 Primary. Just one from each party will advance.
Dist. 2 candidates are incumbent David Hogsett, Jacci Brown and Jim Hayes, all Republicans. At the Primary, Republicans will choose one to advance to the General Election to meet Libertarian candidate Duncan Einspahr, who will automatically advance to the General.
Dist. 3 candidates include Sid Bartels, Mark Davidson and Dennis Kunnemann, all Republicans. One will advance out of the Primary, and, with no Democrats running, will be unopposed in November.
Since Einspahr is running unopposed, he did not take part in the Q & A session, but gave a brief statement during the program.
Questions from the audience at the Imperial Theatre were read to the candidates by moderator Russ Pankonin.
The questions opened with one asking candidates what they see as the top county issue. The hospital and roads came out on top.
Kunnemann said the hospital seems to be the top issue with residents now, and whether the community should proceed with a new facility. He said it’s a necessary thing for the community.
Bartels agreed, but noted the outcome of November’s bond issue will be a factor.
Davidson said several issues are “on the burner,” and agreed the hospital’s future will be affected by the bond issue vote.
Hayes said the hospital issue isn’t just with a new facility, but also with the existing operation and how it can be more financially positive.
Roads topped Brown’s and Hogsett’s issues. Brown said they are a problem, noting economic development and safety aren’t possible without good infrastructure.
Hogsett said residents need to remember roads are made of dirt, and “it’s a never-ending battle.”
Another issue brought up by more than one candidate were the dairies.
The Aurora Dairy project proposed northeast of Imperial drew its own question, which asked what benefits and risks of it are seen.
Brown said while it could provide a great tax base, she added the dairy won’t be buying local corn or alfalfa since they must be organically grown.
Hogsett, who noted the final hearing on Aurora Dairy was delayed to June, said possible pros could be employment. He said there are more organic alfalfa acres being planted now in the county. His concerns included odor and dust, along with more trucks on the road.
Hayes was also concerned with the smell and dust from composting, but said there could be an economic development impact.
A few chuckles came from the crowd on a question that asked how they would become educated on property values and would they always take the county assessor’s advice.