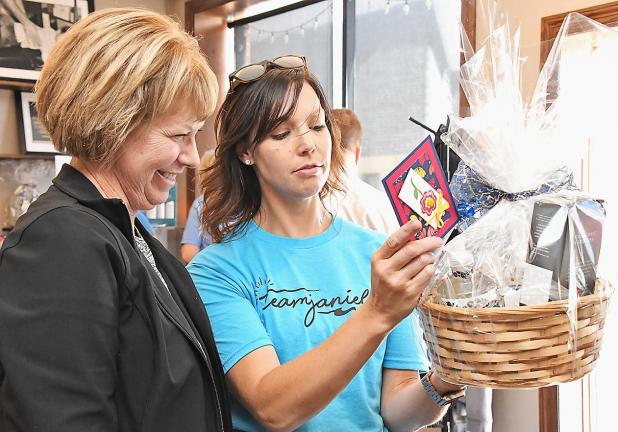 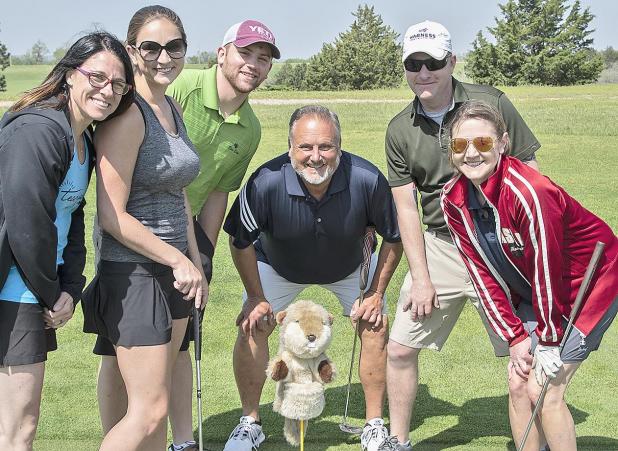 From left, Marisa Smith, Audra Waller, Hunter Spady, Brad Spady, Aaron Richards and Leann Weiss pose in front of a groundhog at Kimble’s benefit golf tournament Saturday. Participants could pay to putt from the groundhog since he was closer to the hole. (Johnson Publications photo) 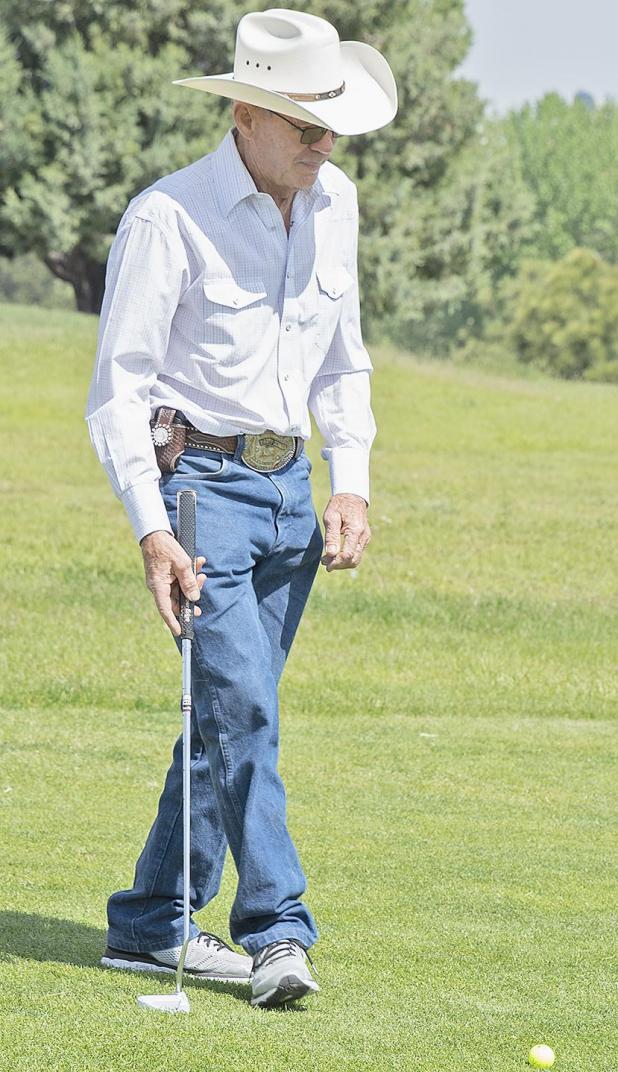 The community gathered at Mathews Family Chiropractic in Imperial on May 24 for a benefit for Janiel Kimble and again last Saturday at Enders Golf Course.
Kimble has been hospitalized in Denver after sustaining injuries during a thunderstorm on April 28.
The incident
Kimble was severely injured when a large glass window crashed and broke on top of her in Enders during the storm.
Janiel was taken to Chase County Community Hospital in Imperial for initial treatment, and then flown out to Swedish Medical Center in Denver.
Kimble’s husband Lance said she received 60 stitches from above her left eyebrow to below her left ear and about 40 staples to the back of her head.
Kimble had surgery to have a plate placed in her broken left arm, and a dislocated left elbow was also set. Her left foot was fractured, as well.
She was eventually transferred to Craig Hospital.
Craig Hospital is a rehabilitation facility in Englewood that specializes in spinal cord injury and traumatic brain injury rehabilitation.
Kimble has been undergoing occupational, speech and physical therapy. Kimble’s doctors are currently working out details to discharge her.
“It will still be a few weeks,” said her mother Cindy Killip.
“They’re looking where they can put her for all these services once she comes home,” she added.
Kimble can do most of the services in Imperial, but speech therapy is the “hangup.”
“But she wants to do all three of them at the same time,” Killip added.
Killip said her daughter is still a little weak on her left side.
Kimble’s head injury was to her frontal lobe, which is located on the right side of the brain and affects the left side of the body, Killip explained.
“(The) right side also affects the speech and thought process,” she added.
Killip said it will be another six months before Kimble can move her left arm completely.
“It’s still pretty stiff,” she said. “The doctors told us it takes 18-24 months before she’s really back to full function. You’d never know it now though. She’s just Chatty Cathy,” she laughed.
The benefits
Mathews Family Chiropractic, the location where Kimble provides massage therapy appointments, hosted two benefits for Kimble recently, both including silent auctions.
On May 24, massage and chiropractic services were offered to those who provided a donation.
Last Saturday, a 3-person scramble golf tournament was held at Enders Golf Course.
Troy Space was the organizer of the tournament, “but I had a lot of help,” he said.
There were 24 three-person teams that played last weekend involving 72 individuals.
There were also around 15 volunteers for the day that Space called “perfect.”
“You couldn’t ask for a better day for golf,” Space said.
Marcie Kelley was in charge of the silent auction, where, like the benefit at Mathews, various businesses around town donated items.
There were also holes where golfers could pay to putt or drive from a better location.
“But at the end of the day, (the score) didn’t matter much because pretty much everybody donated the money back,” Space added.
“There was virtually no payout of any kind.”
Space also said Janiel and her husband Lance are very humbled by all the support of the community.
“Everybody in the community needs to be thanked,” Space said. “It was a great fundraiser.”
Kimble can receive mail at: Janiel Kimble, Craig Hospital, 3425 So. Clarkson St., Englewood, Colorado 80113.