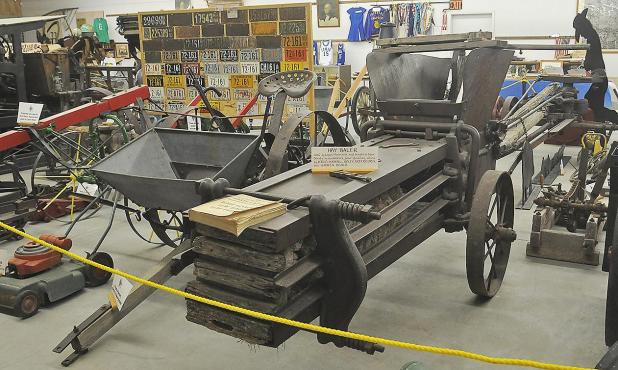 Tom Pantera | Johnson Publications
A hay bailer is just one piece of vintage farm equipment on display in the Chase County Museum.

If the Smithsonian in Washington is often called “the nation’s attic,” then maybe the Chase County Museum in Champion is Chase County’s.
With a collection of more than 6,000 items, ranging from good-sized farm machinery to everyday household items of the past, it’s a comprehensive collection of items embedded in the fabric of the county’s history.
Charley Colton, president of the Chase County Historical Society, said the museum’s roots go back to the 1930s, when the area’s original settlers and some of their children saw the need to preserve local history before those who lived it began to die off.
The museum’s first home was in a former high school building in Champion. Its current building was constructed in 1966 and later added onto a couple of times in the 1980s.
“When they built it, (people like) Anoma Hoffmeister and Edgar Hathaway were great leaders early on when they did the additions and stuff,” Colton said.
“There maybe were others, Calvin Pierce and some other people who really blossomed the museum in the ’80s. That’s when they did the additions. They had items, but they did an early history; the first history book the Historical Society published was back in the ’30s, original pioneer stories. That was invaluable, saving those stories. You can’t just get them any more,” Colton said.
The museum is organized somewhat loosely, but there’s a logic to it.
The part of the building to the east, which often is used for programs, contains farm implements and other machinery, like a newspaper printing press; military uniforms; and exhibits from area schools.
Other parts of the museum have mockups of businesses, homes and schools and exhibits on blacksmithing and horses. Families that donated a large number of items, like the Hathaways and Pierces, have their own specific areas. There are a number of elaborate dioramas depicting historical events.
The sheer number of items and the county’s climate make it sometimes a tough job to make sure everything stays in good shape.
“It is rather difficult,” Colton said. “The humidity of our building, we get mold on some of our clothing. Every year, we’re constantly battling that, trying different ways of keeping that (preserved). Especially the leather items, they’re difficult to keep clean.”
The Historical Society is putting money away toward a large dehumidifier to aid in preservation of fragile items.
Displays change frequently, both to give those attending new things to look at and to help preserve the collection.
“Every year we end up with new items,” Colton said.
“We try to rotate some of the old items that have been displayed for a while out.
There’s no sense in taking a donation if you’re not going to display it,” he said.
For example, the museum has a large number of wedding dresses that can be rotated through.
“It doesn’t do the fabric any good if they just stay on mannequins,” Colton said.
If the collection continues to grow, there’s room to expand. The museum grounds include another building owned by Byron and Marilyn Hust of Imperial, currently used for