Brothers Osborne rocked the Chase County Fair grandstand arena Friday night with several of their top songs including “It Ain’t My Fault” and “Stay a Little Longer.” Ticket sales bypassed 2,200 for the laser-lit show that featured Kendell Marvel as the lead-on. (Johnson Publications photo) 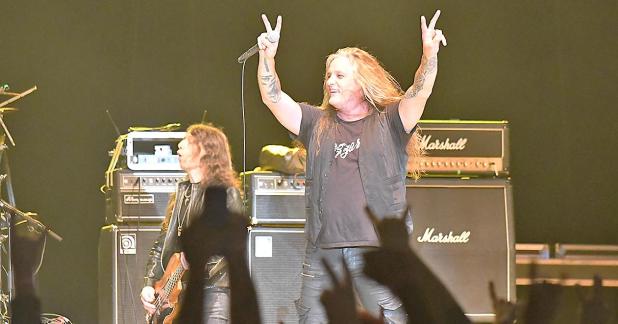 Sebastian Bach, the voice of the rock group Skid Row, shows his appreciation to his fans as they rocked along together with his music at the Chase County Fair Saturday night. (Johnson Publications photo)

Fair board members look at lots of factors when measuring up the fair’s success for the year. Overall, fair board members finished the week feeling pretty good about the 2018 Chase County Fair.
Board President Chad Oxford said there were some events that exceeded expectations while others were not what they were hoping for.
For instance, the participation in Monday’s barrel racing event drew nearly 100 riders and was well attended.
Interest in Tuesday night’s Ranch Rodeo and bronc riding continues to grow, with good crowds around the arena and in the grandstands.
Carnival ride tickets finished the week above average.
The Heartland Pullers tractor pull on Sunday proved to be a hit and was a great way to cap off the fair, Oxford said.
Attendance at the key events Wednesday through Saturday was down some compared to previous years.
The numbers at the Christian family show were down some while the demo derby drew 12 cars which ran in two different heats.
Entertainment Chair Alex McNair said he shoots for a goal of 2,000 people at each of the Friday and Saturday night shows.
“We want to get people on the grounds,” he said.
That helps everything from vendor sales to expo attendance.
The attendance for the Brothers Osborne/Kendell Marvel concert Friday night eclipsed 2,200. On Saturday, the attendance at the Sebastian Bach concert, with Jack Russell’s Great White, was more than 1,200.
McNair said a couple factors played into the attendance.
Typically, they like to have the country concert on Saturday. But due to the routing this year, Chase County got the country show Friday night.
Many area schools have already started classes so it makes it a little more difficult for people to make a Friday night show.
Over the last several years with the country concert on Saturday, attendance ranged from 2,700 to 3,000.
McNair said Saturday’s forecast for rain likely hurt the walk-up crowd the shows normally get. The rain ended up being light and delayed the show by only about 30 minutes.
McNair said he’s gotten lots of positive comments on both shows, which indicates the diversity of people the two music  genres draw.
McNair said the fair board will review this year’s fair over the coming months, as well as setting a direction for entertainment and other activities for next year.
Dates for upcoming fairs

To read more on the Chase County Fair and other stories, please log in or subscribe to the digital edition. https://etypeservices.com/Imperial%20RepublicanID359/